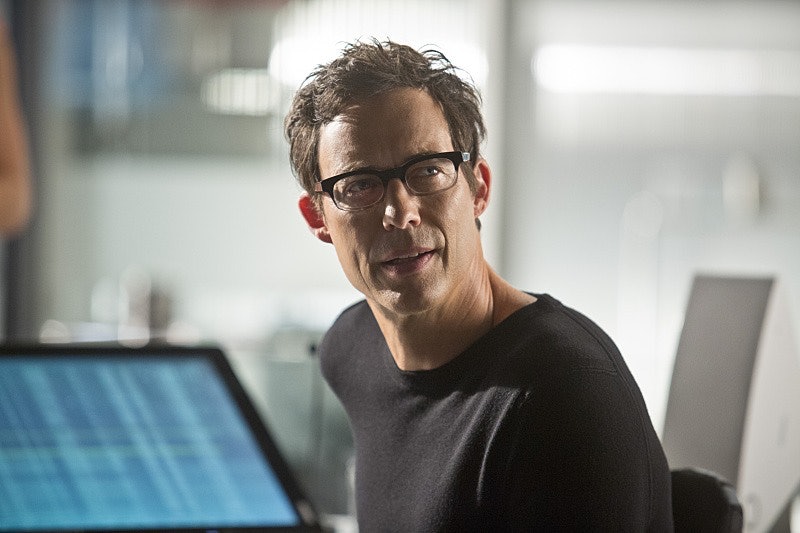 After the final scene of "The Man In The Yellow Suit," it seems likely that Harrison Wells might be Reverse-Flash on The Flash . Fans have cropped up many theories about the identity of Reverse-Flash over this first season's arc, and while we're nowhere closer to confirming it than we were at the beginning of this episode, it has raised a lot more questions. When Harrison and the special forces team cornered Reverse-Flash in the tachyon prototype machine from Mercury Labs, both Harrison and Eddie Thawne, our two main suspects for Reverse-Flash, were present in the room with him. And just to confuse us even further, Reverse-Flash reveled in beating the crap out of both of them.

Of course, at the end of the episode we saw Harrison sneak into his lair, where he was storing the Reverse-Flash suit and even talked in the ominous Reverse-Flash voice. This would either indicate that he is working with Reverse-Flash, or that Reverse-Flash is some kind of alter version of himself that has traveled from the future. I'm wondering, though — do we completely disregard the idea that it might be a future version of Eddie now that this new information has cropped up? There was definitely something very telling in the way that Reverse-Flash knocked around everyone else and then stared at Eddie for a little while before pushing him out of the way.

Regardless, it's clear that Harrison (as usual) is up to no good, which really begs the question about why he would possibly want to be so involved in the attempt to capture Reverse-Flash in the first place. Was he so intent on doing it as some sort of insurance, so that the suspicion wouldn't be placed on him in the future? Or was there a reason he needed to get his hand on that tachyon prototype, and he never had any interest in catching Reverse-Flash at all?