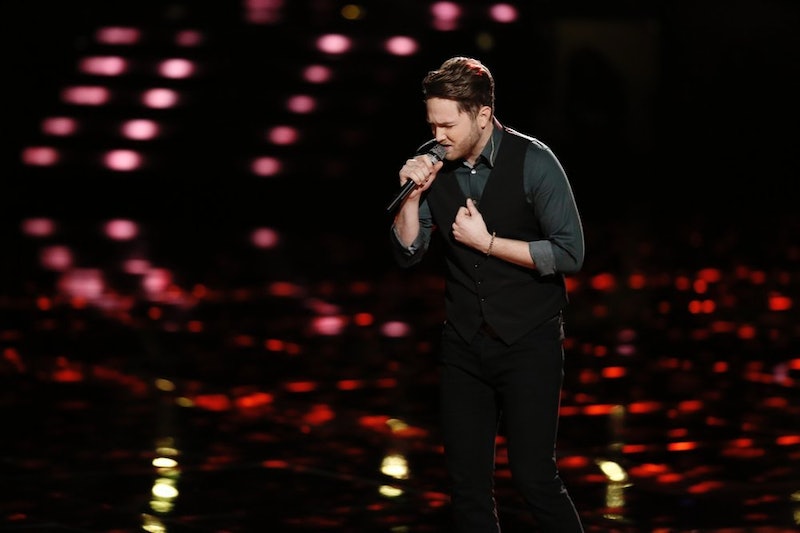 The new Wildcard vote on The Voice has given Pharrell a fighting chance in this competition. The vote from Top 8 to Top 5 left Pharrell teamless — Luke Wade and DaNica Shirey were both sent home. A team that was once called unbeatable was left empty and hopeless at winning the competition — until now. Wade and Shirey, and even Top 10 contestant Sugar Joans, all have a chance of getting Team Pharrell a spot in the finals, but can they make it happen? The performer of the three that has the best chance of winning the wildcard is Luke Wade, and we should have a little faith in him.

Wade performed "Have a Little Faith in Me" for his wildcard performance, and gave the audience many reasons to put their faith in him. (I swear I'm done with that pun.) According to the judges, Wade was totally himself on stage tonight, and that's what made his performance so good. One of the reasons that Wade was sent home after the Top 8 is that he got too risky in his performances. He got cocky. Wade was everyone's favorite (or at least he was until America voted him out), and he knew it. It seemed as if the farther he got in the competition, the more comfortable he got and the lazier he got. And when you're battling for the title of The Voice against 7 other incredibly talented artists, there is no room to be lazy. But it's obvious that Wade recognized this during his week at home, and he came back better than ever to fight for his life on the show.

Wade's performance was definitely better than his former teammates, but was it enough to win? Damien, who was voted out earlier tonight, gave the performance of his life for the wildcard, and he had far less time to plan than Wade did. Adam Levine even called anyone who didn't think Damien should win "insane." Damien most definitely deserves a second chance because he is The Voice , but if he were to lose the wildcard to anyone it has to be Wade.