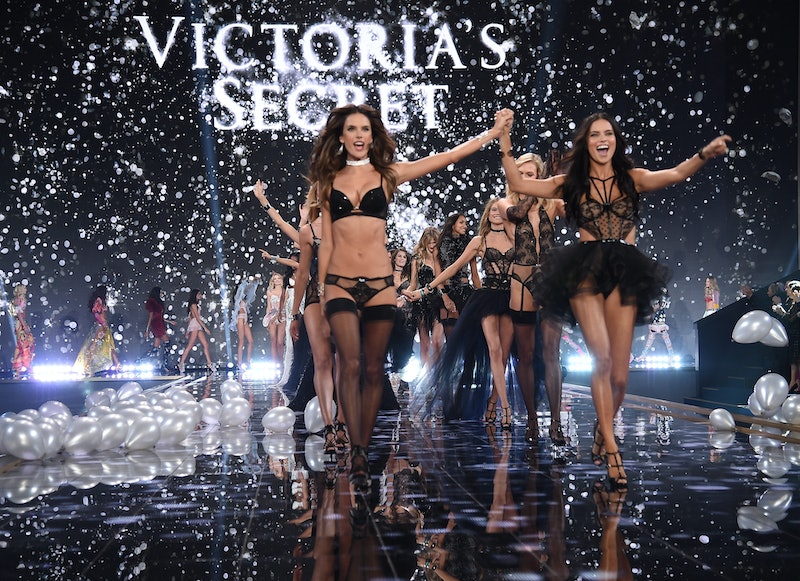 Next year will be the show's 20th anniversary, so maybe it was a way to try out a new locale. London has been know for its fashion, particularly in the 1960s. But Victoria's Secret is an all-American brand (even if the models are international). Original founder Roy Raymond opened the first Victoria's Secret stores in the San Francisco area in the late 1970s and early 1980s. Last year's fashion show's first segment was the "British Invasion," so perhaps that helped to inspire the move. Plus, the models themselves seemed to appreciate the locale change.

But besides the hilarious videos of an angel in lingerie flirting with a British guard, there are other reasons that London made sense. The advertising during the show was definitely Christmas inspired — and London does make me think of Christmas. (Probably because of Charles Dickens — which is about as far as you can get from sexy bras.) With the accents of red and shots with models in front of double decker buses, who wasn't inspired to buy some underwear for a loved one? ('Tis the season to buy lingerie, amiright? That's exactly what Baby Jesus would have wanted.)

VS model Lily Aldridge's father is British and she was raised in England, so for her she said it was like coming home. And there were some epic shots of the iconic landmarks throughout the show — with Big Ben, St. Paul's Cathedral, and Tower Bridge all on display.

Yet the opening song the angels strutted out to was "Hollywood Nights" by Bob Seger. Can you get any more American? But, don't worry, it was promptly mashed up with T-Rex's "Bang-a-Gong" to get us in the British spirit. Ed Sheeran sang "Thinking Out Loud" in the "Exotic Traveler" (or shall I say "Traveller"?) section. And although Sheeran himself is the epitome of British, that song in particular doesn't really make you think of his English roots.

But what we should really take away from this is that underwear, glitter, runways, and wings know no national boundaries. So although I could have done with more British inspiration, we didn't get Swift in a full British-flag (the Union Jack) outfit like last year — which was a good thing since her fashion this year was much more sophisticated.

And we'll have to wait until next year to see if Victoria's Secret will return to its American homeland for the 20th annual fashion show. Until then — cheers, mates!