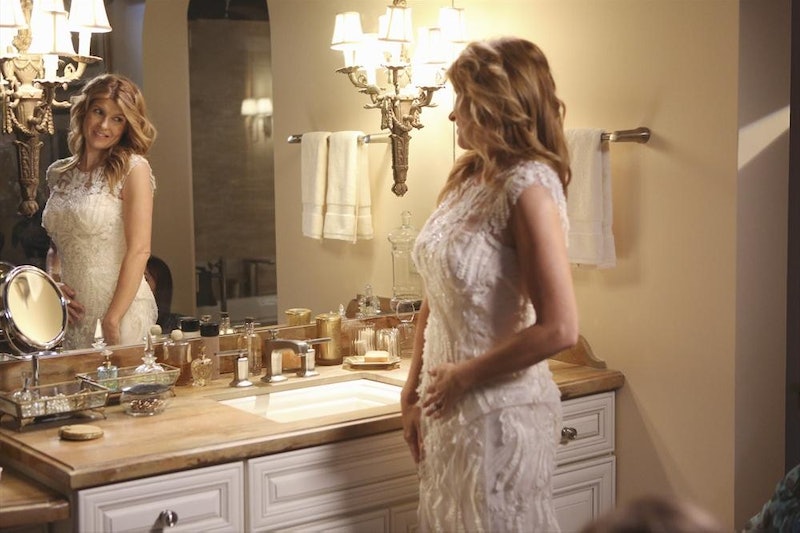 Update: At the end of Wednesday night's episode it was announced that Nashville will return on Feb. 4, 2015. The big, winter, midseason finale of Nashville airs on December 10, and already it seems impossible to wait for it to come back from its winter hiatus. So, when does Nashville return in 2015? ABC is surely trying to test your patience. You're going to have to wait a little bit longer before you can even know how long you have to wait, if that makes any sense.

The truth is, the network has announced some of its winter schedule, especially when it comes to new-series premieres. The knights-in-armor musical Galavant will debut on Jan. 4, and the Agents of S.H.I.E.L.D./MCU spinoff Agent Carter will debut on Jan. 6. The network has also announced return dates for Once Upon a Time (March 1) and Agents of S.H.I.E.L.D. (March 3), along with Grey’s Anatomy, Scandal, and How to Get Away with Murder (all returning Jan. 29). Missing from that list completely? Nashville. Ugh.

It's possible to make an educated guess about its return, though. The first season of Nashville had its midseason finale on Dec. 5 and returned on Jan. 9, and the second season went on hiatus on Dec. 11 and returned on Jan. 15. Chances are, it'll return sometime in mid-January. The Futon Critic also lists Nashville 's midseason premiere for Jan. 7.

If you're fiending for a Nashville fix before then, here are a couple things to do.

Listen to Their Christmas Album

Yes, everyone and their cousin puts out a holiday album (and you can tell that most of them are recorded in the summer when there's nary a jingle to be belled). But, if you're feeling in the spirit, there's no harm in adding another festive album to the queue. Christmas with Nashville has 12 holiday songs performed by the cast, including Hayden Panettiere's rendition of "White Christmas" and Connie Britton's version of "You're a Mean One, Mr. Grinch" (my favorite).

Go Behind the Scenes

If you're looking for more Nashville content out there, ABC's website has some behind-the-scenes videos about the making of the music in the show. The network's "Music Lounge" has a look at the season premiere's "I Know How to Love You Now," discussed by singer/songwriters Charles Esten and Deana Carter. On that section of the site, there are also a few acoustic and extended performances of Nashville songs. Sure, they don't have the soapy drama of the

real Nashville, but it's good for getting some country tunes stuck in your head.

If you must watch something on ABC that has anything to do with Nashville, Dick Clark’s New Year’s Rockin’ Eve with Ryan Seacrest — phew, that's a mouthful — will broadcast part of Nashville's Bash on Broadway live, which will also be hosted by Deacon himself, Charles Esten. Country-ish stars Gavin DeGraw and Lady Antebellum are the headliners. Just sayin'.

More like this
Did 'Grey’s Anatomy' Just Drop A Major Taylor Swift Easter Egg?
By Grace Wehniainen
10 Stranger Things-Inspired Halloween Costumes For True Fans
By Emma Carey
The Miraculous Real-Life Thai Cave Rescue Mission Still Resulted In 2 Deaths
By Brad Witter
7 ‘Bridgerton’-Inspired Halloween Costumes You Can DIY
By Emma Carey
Get Even More From Bustle — Sign Up For The Newsletter