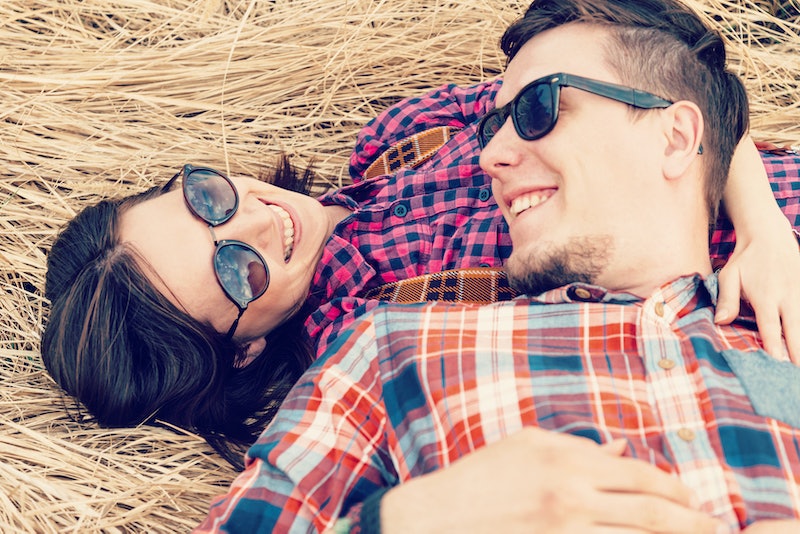 So, I'm a relationship girl. For evidence of this, please see the eleventy-billion years of relationships I've been in to date, and don't forget to track that timeline back to early elementary school. Yes, OK, I'm only in my early 20s — that's why it's all the more impressive that I've been dating since approximately the Big Bang. But I'm also so much MORE than a relationship girl! I'm also a writer, one-quarter Filipino, and, oh yeah, a big-time serial monogamist, which means that my love steez is far more intense than any mere relationship person's.

Is it healthy to be perpetually be in a relationship without the teensiest bit of breathing and growin g room in between couplings? Like, probably not. Blah blah codependent blah I need to work on it blah blah blah. But I also just changed jobs and my shrink doesn't take my new insurance, SO! Let us not dwell on things that would take a lot of time and energy to change at this particular moment in time. Anyway, it's so much more fun to commiserate with each other! Raise your hands, my lovely fellow serial monogamists — I know you'll understand everything I'm about to say, because we're in this together as long as we're in relationships, which, yeah, is always.

Your single friends look like this when you talk about your current squeeze...

They say they've heard it all before, and I'm like, hey, I don't complain when you guys yammer on about your Tinder matches.

...and they look like this when you introduce them to your new No-Seriously-It's-For-Real-This-Time Partner.

But it's SERIOUSLY FOR REAL, guys.

This is possibly because you bring home other halves the way some people bring home groceries.

I can't help it if I'm a one-dude-at-all-times magnet, you know?

But that's OK, because you have a hard time relating to your single friends, anyway.

So you just... go out to dinner? With random strangers who could possibly murder you? And you would rather have a fun one-night stand than spend a week of cuddling? WHAT DO YOU KNOW THAT I DON'T KNOW?

Oh, and your new partner knows all about your last one.

It meant something to you; you're not just going to forget it happened right away. (Although maybe your new boo is not the best person to reminisce with?)

You attempted a casual DFloMo in college...

That's Dance Floor Makeout. Just because I don't do them doesn't mean I don't KNOW THINGS!

...and proceeded to hook up with the dude/lady exclusively for, like, three months.

You refer to this as your "single" period.

Also, what is this "no-strings-attached sex" of which people speak?

Is it animal, mineral, or vegetable?

In your least proud moment, there may or may not have been some... overlap periods between relationships.

NOTHING TO SEE HERE EVERYTHING'S FINE KEEP IT MOVING.

But you rationalize those away, because everything that happened was in the name of True Love.

If Disney's taught us anything, it's that nothing gets in the way of True Love. Not even your conscience.

Nobody's feeds got time for that.

Marriages of convenience don't seem thaaat far-fetched to you.

After all, you've definitely dated someone just because they were NICE, and they were THERE.

And though it takes you three glasses of wine to admit it, you probably have someone on the hook right now.

Just in case of emergencies.

Sometimes, your inability to be single for any significant period of time makes you feel like a total failure.

If it weren't for Netflix, depression might be imminent.

After all, isn't singledom a necessary part of being young?

I've definitely heard that somewhere before.

In these moments, you realize that the cure to serial monogamy lies not in finding the right partner, but in learning to love yourself...

...and you toss that idea around in your head for, like, a minute before texting your new guy, because honestly, it's a lot to take in, OK?

More like this
23 Super Sweet Things To Write In A Valentine's Day Card
By Karen Belz and Lexi Inks
Here’s What TikTok's "Mascara” Trend Is *Really* About
By El Hunt
The 3 Zodiac Signs Most Likely To Get Married Later In Life
By Kristine Fellizar
4 Zodiac Signs That Will Take Forever To Admit They Like You
By Kristine Fellizar
Get Even More From Bustle — Sign Up For The Newsletter
From hair trends to relationship advice, our daily newsletter has everything you need to sound like a person who’s on TikTok, even if you aren’t.