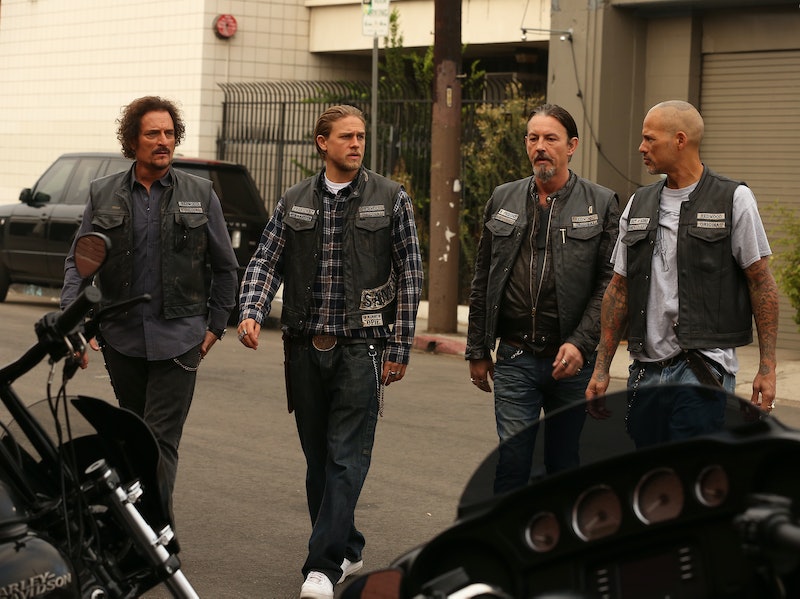 It's a question fans have been pondering ever since Season 7 kicked off and in Tuesday night's Sons of Anarchy series finale, the Grim Reaper finally hit its intended mark. Jax Teller is dead, firmly solidifying all of those SOA and Hamlet comparisons. And while I'll admit I definitely shed a few tears, there's no denying how beautifully it all played out. Knowing that his Mayhem fate was already sealed, Jax decided to use what time he had left to at least attempt to right the wrongs he had created. Not only did he set Wendy and his sons up financially, but he also paid a visit to D.A. Patterson's office to explain the events surrounding Tara's death — right before heading out to go murder both Barosky and August Marks, basically insuring the violence in Charming would finally come to an end. Like for real this time.

And then the goodbyes came and man-oh-man how the waterworks flowed, for both the viewers and the characters. While each SAMCRO member managed to choke out their vote for Jax's demise, you start to think they might actually do the deed themselves. But like so many times before, Kurt Sutter had other plans and managed to throw fans one final curveball. After shooting Happy in the arm to make Jax's escape look convincing (sorry, Hap), the newly-demoted SOA President took off on his father's old bike and headed to that same piece of highway that took John Teller's life.

You see, Jax knew that the police would be out looking for him (because that's what normal law enforcement tends to do when you start murdering people in plain sight), and that' exactly what he was banking. While saying a few final words to his father, an officer pulled up and told him to get off the bike. Right then, you knew exactly what was coming. Jax fired off a few shots to initiate the chase and then barreled down the highway. But he wasn't running away for once. He was looking to go out the same way his father did as a way to finally put an end to all this madness.

Which is what made the appearance of that Semi all the more fitting. Insanely tragic, mind you. But still, very poetically fitting. Letting go of his handlebars, Jax closes his eyes and smiles… right before crossing right into the massive truck's path. But who was the one in the driver's seat? That's where Sutter's genius truly shines. It was none other than Michael Chiklis, who guest starred in the previous episode "Red Rose" as Gemma's road trip pal, Milo.

So there you have it, folks. Michael Chiklis killed Jax Teller, which is something I can honestly say no one could've ever seen coming. All other TV shows might as well go home now because this night belongs to Sutter and Sons. Thanks for the ride, fellas.

More like this
Shonda Rhimes' Net Worth Makes Her One Of The Wealthiest People In TV History
By Hugh McIntyre
The Best 'Grey's Anatomy' Intern Moments, From MAGIC to Glasses
By Grace Wehniainen
'The White Lotus' Season 2 Trailer Teases Multiple Affairs & Another Dead Body
By Bustle Editors
Who’s The Richest 'Grey’s Anatomy' Star? See The Net Worth Of Each Cast Member
By Hugh McIntyre
Get Even More From Bustle — Sign Up For The Newsletter