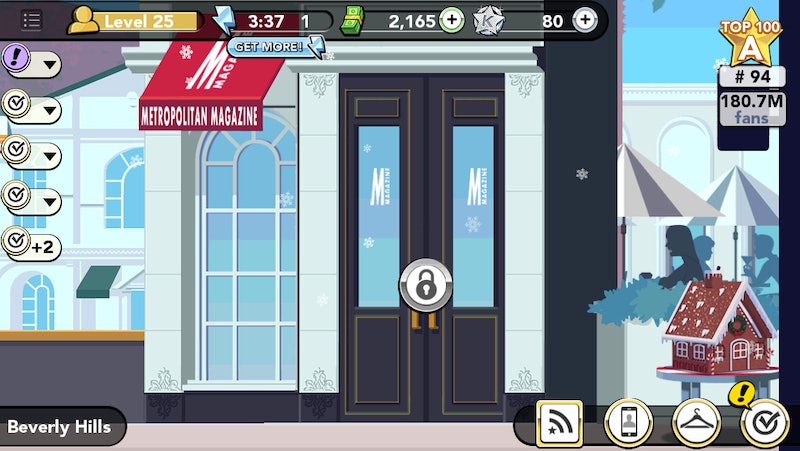 Who would have thought Kim Kardashian's iPhone game would get so popular she'd add 15 different locations to visit? With so many cities, it can be hard to keep all the different buildings straight when Simon calls you up for a job. Like where on earth is Metropolitan Magazine in Kim Kardashian: Hollywood? It seems like so long ago that the game first launched and you could only travel between the California locations by bus, and if you were lucky you could fly to New York. But now with a ton of global destinations at your fingertips, it's so frustrating when Simon assigns you a task and then doesn't tell you which city the job is located in.

It seems like lately every photo shoot is housed at Metropolitan Magazine, and yet I can never for the life of me remember where it is. Usually you can look to the name for a clue. For example, Femme magazine is in Paris and El Canario is in Mexico. But Metropolitan Magazine's name doesn't really hint at its location. Officially a metropolis is a densely populated city. I figured then, the magazine must be located in Downtown LA! But that journey was fruitless as once I arrived I realized LA holds PopGlam studio, not Metropolitan Magazine.

So I tried to think. Kim sometimes draws from real places to name her fictional buildings, like how Oak in New York is based on the 1 Oak nightclub in NYC. I hopped onto Google and typed in "Metropolitan Magazine" and Wikipedia let me know that there was once such a publication in circulation based out of New York. So my avatar jumped on her (private) jet and hightailed it to JFK airport. Once there I was disappointed to see that the only magazine Kim's NYC location housed was Muse.

I was running out of ideas and feeling desperate to start this stupid ad campaign Simon assigned me when I realized something. I've been going to Metropolitan Magazine since I first started playing which meant it had to be in the California section of the game. But even more importantly, I remembered why Metropolitan Magazine never stuck in my mind. It was overshadowed by an even better place in the city: Kim Kardashian's Beverly Hills mansion. When visiting Beverly Hills I never focused on the magazine building because I was always stopping in to say hey to Kim instead.

Mystery solved: Metropolitan Magazine is in Beverly Hills even though it makes no sense since at 34,000 people the 90210 is hardly a metropolitan area. But whatever, now I know and hopefully I won't forget again!