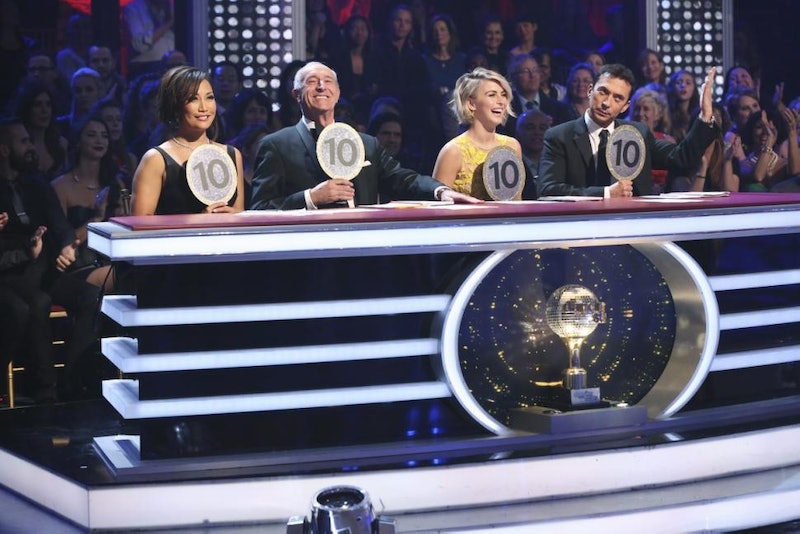 One of the original Dancing With the Stars judges is leaving after the spring segment, but it's actually good news. Len Goodman has announced he'll quit after the next DWTS season to focus full time on Strictly Come Dancing, the UK version of the show. Although some may be sad to see the judge go after 10 years, it bodes well for the continued success of the reality series.

Goodman was absent for a significant portion of this past season because he was filming the UK show. This allowed for celebrity guest judges like Jessie J. and Kevin Hart to hang out on the panel and liven things up. But once Goodman was back, things got a little too serious. Not only was he playing catchup, having not seen many of the performances, but he was all business and the show lost a bit of its spark.

See, Goodman is generally known to be one of the tougher judges because he's old school. He focuses on the actual steps to make sure what the couples are doing is an accurate rumba or pasodoble. He also absolutely hates when theatrics take away from the dance, which means he's not fond of elaborate costumes or over-the-top themes.

But I have news for Goodman: that's what viewers love. If I wanted to watch a show about highly skilled, accurate dancing I could watch the professionals on So You Think You Can Dance. But Dancing With the Stars is supposed to be more fun. It stars celebs who can't necessarily dance but who have connected with the audience in their previous line of work. The best dances of the show were the ones that gave a nod to what we loved the celebrities for like Alfonso Ribeiro's Carlton from Fresh Prince, or Lea Thompson showing up in a DeLorean straight out of Back to the Future.

Goodman never appreciated the entertainment factor of the show and his opinion weighed heavily on the choreographers who wanted to go all out but were fearful of the types of scores they'd receive. Now that he's on his way out, the show can transform into including more of the theatrical side of dancing. You can still have a good Samba or Salsa while also having fun costumes and intricate sets. It's putting all of that together into one spectacular number that the audience responds to.

With Goodman gone the choreographers have the room to really explore, and DWTS can only get better from there.