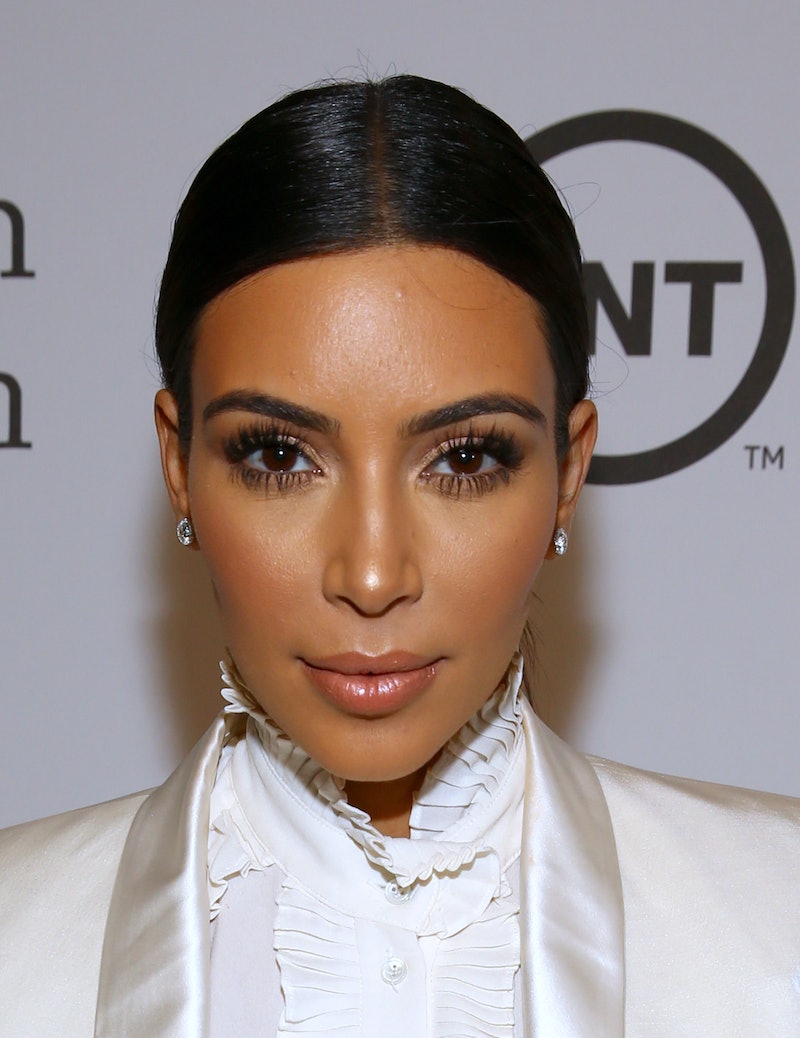 Even if Kim Kardashian is pop culture's poster girl for the curve-positive renaissance, is it a good sign that her own self-confidence seems a little shaky? In a recent interview with Elle UK, Kim Kardashian talks about learning to love her body, but her views are a little problematic. I wish I could throw up my arms and rejoice for Kim in her newfound self-assurance, but I don't think she's doing this whole "communing with her inner Aphrodite" thing right.

In the January 2015 issue, Kardashian levels with the masses by indicating that learning to love her body was a process. Kardashian has come under massive scrutiny in the past for decrying her baby weight gain in a post on Instagram, so maybe this is a step in the right direction. She discusses the effect of societal pressure on her self-esteem as a young woman, saying,

It’s taken me a long time to be happy with my body and for my confidence to grow to what it is today. I grew up when the body to have was the tall, slim, supermodel one, like Cindy Crawford’s. No one looked like me.

It’s good to break the mould and re-create one. I’m an Armenian girl, I have shape, and it turned out people liked that. That makes me feel good about myself and other women for being so supportive. I am a confident woman but I didn’t arrive confident. It has built over the years.

In a nutshell, Kardashian didn't wake up this confident. It took numerous positive reviews for her to like herself. Further on, she discusses the general feeling of having lost control of her body when she became pregnant with North:

I’d think God was doing this for a reason. He was saying: "Kim, you think you’re so hot, but look what I can do to you." My body just went crazy. After five months I swore I’d never get pregnant again. I got so huge and it felt like someone had taken over my body.

Now, certain particularly self-deprecating pregnant women may hear her account and think, "Even Kim Kardashian dealt with this. My feelings of being totally out of control in my own skin are totally normal!" On the other hand, viewing a few extra pounds as a Divine retribution isn't exactly the way you should talk about pregnancy. Gaining a bit of weight is a natural symptom of growing a person inside you. Hate to break it to you, Kim, but your story is not a parable to warn other women against the biblical consequences of vanity. That's just some body-shamey BS.

Still, she has to put up with far more scrutiny than the average person. If she's become eternally actualized in her beauty, despite all the the unsolicited feedback that the general public has to say about her body, then snaps for her!

Thing is, her journey to self-love seems to rest on external feedback rather than on a belief that her body is great no matter what people say. If Kim feels that her confidence is on the uptick after having her baby, Mazel Tov! You do you, Kim. However, the language she uses here reinforces the cultural notion that women should look outward for validation, while maintaining a constantly critical eye on their bodies. Those are ideas that I sincerely hope she doesn't pass onto her own daughter.