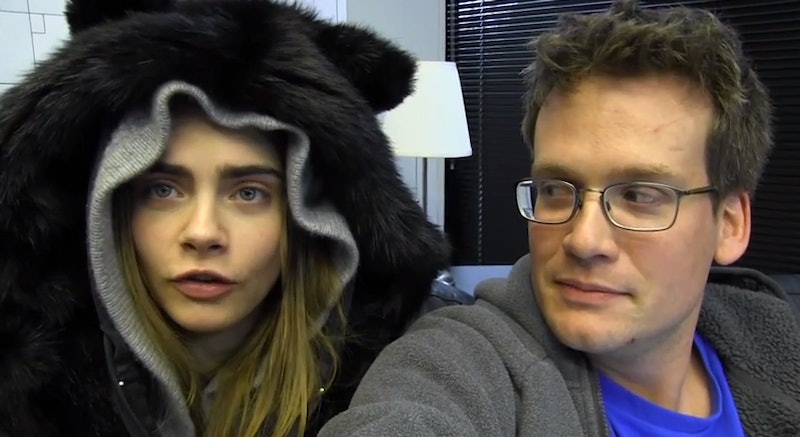 So it turns out I've been pronouncing Cara Delevingne wrong this entire time. It's OK; I've been spelling it wrong, too. Now, though, I am firmly on the boat that heralds the model as its It Girl — she's just got a good energy. It just took this great video of Delevingne and Fault In Our Stars author/Vlogbrother John Green answering questions about their movie Paper Towns to make me see it.

"Question Tuesday" is a great Vlogbrothers tradition/segment in which — you guessed it! — Green answers "real questions by real Nerdfighters." Green's been workin' hard on the set of the next adaptation of one of his novels, Paper Towns, as an executive producer, and has done a few "Question Tuesdays" with the cast before. But this is the first featuring Delevingne, who plays (in my opinion) the story's most compelling character, Margo Roth Speigelman.

Given that I haven't yet seen her speak in a movie, I was a bit worried about the American accent the role requires Delevingne to do — but she proves me wrong seconds into this video, with her British accent not even coming out to play until towards the end. Her explanation of her character (and how she relates to her) also have me firmly onboard to see whatever it is they're cooking up for that movie right now.

Just watch the video. It's straight up delightful, Delevingne's a particular kind of wacky that I apparently adore, these two have a great rapport, and they address Important Things like her famous eyebrows and co-star Nat Wolff's nutritiousness. Delevingne also has a very, very detailed idea of what she wants to be when she grows up, and it's not movie star or supermodel. And her face when confronted with puppy-sized elephants is perfect.