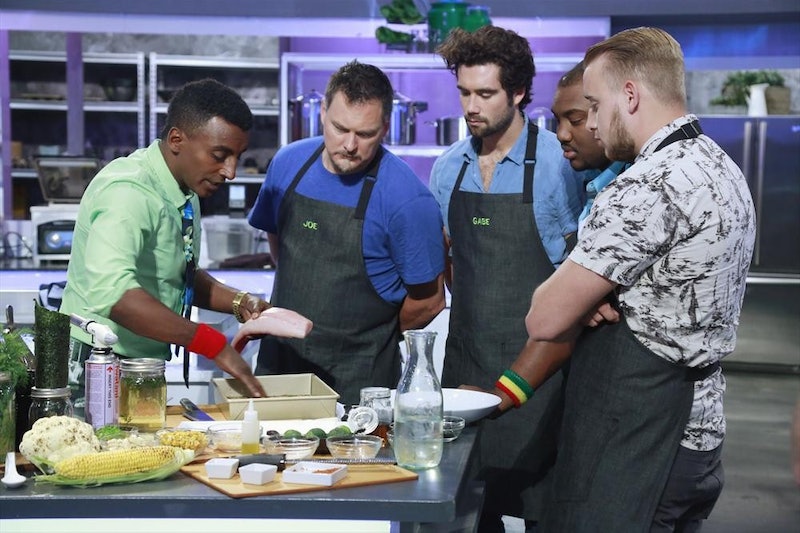 The third season of culinary-cooking competition The Taste kicked off with the debut of more than 20 chefs, both professional and amateur, who all auditioned for a chance to compete. 16 hopeful contestants were chosen to join celebrity coaches Anthony Bourdain, Nigella Lawson, Marcus Samuelsson, and Ludo Lefebvre in their kitchens. Nigella had to eliminate one of her own four team members after Top Chef winner and guest judge Stephanie Izard selected her team as the worst during the childhood-themed challenge — but that's not to say that Nigella's team doesn't still have a winner. In fact, of the 15 lucky cooks that remain and there's at least one notable contestant in each kitchen who has a chance at taking home the title.

From here on out, each episode will feature both a team and an individual challenge, and the contestant (or contestants) with the worst bite each week will be eliminated. For the most part, the coaches will double as judges, blindly testing each contestant's dishes and eliminating or rewarding them solely based on taste. Without even knowing, a mentor could be sending home a member of his or her own team. But each mentor also has at least one contestant who might just make it to the finale.

Nigella insisted during the premiere that the people who succeed are the ones who keep on going after setbacks, and Tristen is the epitome of that. Many of the contestants who succeed in the competition are the amateurs — the ones who aren't personal chefs or restaurant owners. Tristen began his career at 15, cooking for McDonald's, and is now a Hotel Chef at a Four Seasons in Texas. His audition dish got all four judges fighting over who would become his mentor and he went on to win the team challenge for Marcus. Not only was it an honor for Marcus to choose Tristen's dish as the best on the team, but it was also the best of the 16, according to Izard. If Tristen isn't on a forward trajectory in his career, I don't know who is.

Another contestant who is on an upward path in her cooking career is Vanessa Lauren. She revealed that her former occupation was stripping, after her mother's illness left her in a state of uncertainty, but she found another path through cooking. Even though Vanessa is already a professional, working as a private chef, she deserves to have her work noticed just as much as Tristen does. Her story of how she found much-needed comfort in the kitchen is inspiring and her dishes could be even more-so in the coming weeks of competition.

I might be a little biased towards Mia because I, too, am a Jersey Girl, but that doesn't make her presence in the competition any less notable. The fact that Anthony Bourdain pinpointed her audition dish as being from the Jersey Shore is impressive in itself, because it proves she knows exactly who she is as a chef. But even though Izard didn't agree with Nigella's thoughts about Mia's Mac and Cheese, Nigella choosing Mia's dish as the one to represent her team established her as a favorite. Mia is already a restaurant owner familiar to anyone in Wildwood, N.J., but this show is the perfect chance for her to branch out.

If America could vote in this competition, Dan is the one we would all be voting for. He is one of the only contestants with little-to-no experience with professional cooking because he chose to be a firefighter instead. Dan was inspired to join the squad when a friend of his died in a house fire, but he cooks for his colleagues whenever he can because it's his passion. Dan got the mentor he wanted and is willing to do whatever it takes to go all the way. He only got two judges to pick him, but his story is inspiring, his potential showed during the team challenge, and I think he'll thrive the most with Ludo as a mentor.

More like this
Here’s Everyone Heading To The Beach On 'Bachelor In Paradise' Season 8
By Grace Wehniainen
A Former 'Strictly Come Dancing' Pro Permanently Joins 'It Takes Two' Spin-Off
By El Hunt and Sam Ramsden
Kevin Kreider Finally Asked Out Kim Lee On 'Bling Empire'
By Brad Witter
The 'Love Is Blind' Season 3 Teaser & Release Date Are Here & The Cast Is "All In"
By Kadin Burnett, Grace Wehniainen and Gabrielle Bondi
Get Even More From Bustle — Sign Up For The Newsletter