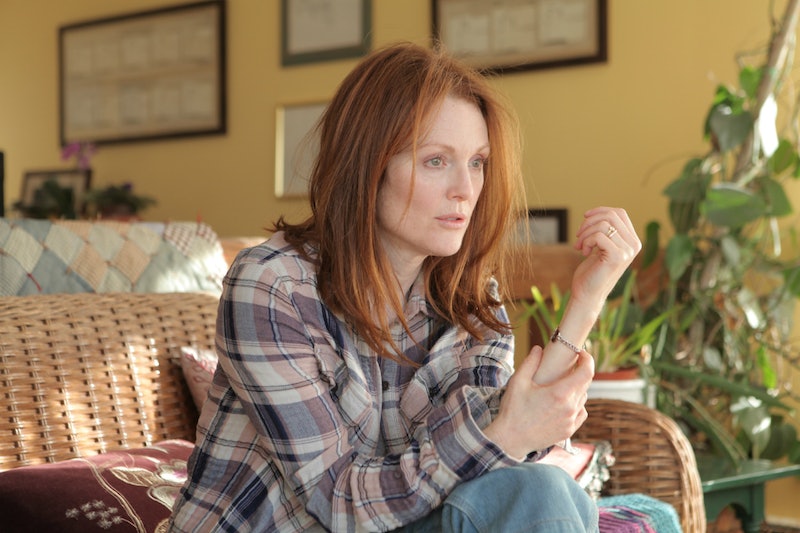 In that tireless game of Academy Awards nomination soothsaying, the Screen Actors Guild proves a veritable player year after year. Those preparing for office wide Oscar pools can look to the SAGs to help fill out Best Actor and Actress categories. It may seem like a copout, but the Academy and the Guild are pretty consistently in step when it comes to recognizing acting talent... with exception.

This year's SAG nominations honor the expected players from 2014's cinematic plate: those depicting real-life prodigies and battlers of harrowing disease, those playing well against type or coming out the gate with long overdue tour-de-force. All the sorts of things the Academy loves. But before you go transcribing every one of 2014's SAG nods onto your Oscar ballot, there are a few things to bear in mind.

In the Female Lead category, we find Julianne Moore — nominated for her devastating turn in the Alzheimer's disease drama Still Alice , and ranking as the colloquial favorite (thanks in part to a refreshed narrative about her long unrewarded contribution to the arts) — alongside Reese Witherspoon (for Wild, called her best role to date), Felicity Jones (riding in The Theory of Everything, the obligatory biopic nomination), Rosamund Pike (the "fun" one: Gone Girl), and Jennifer Aniston (for the largely yet-unseen Cake, primarily hanging tight to the "Wouldn't it be bananas if Rachel Green won an Oscar?!" hype).

On the Male Lead side, the lineup is a touch more interesting. Yes, the usual suspects are represented: the genius-facing-adversity biopic headliners Eddie Redmayne (as Stephen Hawking in The Theory of Everything) and Benedict Cumberbatch (as Alan Turing in The Imitation Game) lead the pack; Steve Carell occupies the comedian-going-way-dark position with Foxcatcher; Michael Keaton earns a nod for the flashy and fun Birdman. But the surprise entry here is Jake Gyllenhaal for his role in Nightcrawler, a movie we won't likely see get any love come Oscar time.

But that's not unusual. More often than not, the SAG nominees for Female and Male Leads will bear at least one discrepancy with their respective Oscar categories. Take a look back at the history of SAG's nods and wins in company with that of the Academy's.

The Female Lead SAG Award and the Best Actress Oscar

In the 20-year-and-counting-run of Screen Actors Guild Awards, we've seen...

Interestingly enough, there was actually one instance (in 1997) where the SAGs nominated six women for the Female Lead role. Only four were also nominated for the Best Actress Oscar that year.

Additionally, it is far more common for SAG and Oscar to grant victory to the same actress than it is for them to differ come time of ceremony. Fifteen actresses have won both the Screen Actors Guild Award for Outstanding Performance by a Female Actor in a Leading Role and the Academy Award for Best Performance by an Actress in a Leading Role for the same role; only fives times have the ultimate outcomes differed. Furthermore, never once has a Female Lead SAG winner not been nominated for a Best Actress Oscar, nor has the reverse occurred in the years since the SAG Awards were instituted.

The Male Lead SAG Award and the Best Actor Oscar

In the 20-year-and-counting-run of Screen Actors Guild Awards, we've seen...

In the year 2000, Benicio del Toro won the Screen Actors Guild Award for Outstanding Performance by a Male Actor in a Leading Role for his role in Traffic, for which he was not nominated for a Best Actor Oscar. This marks the only time wherein a SAG winner for a lead role did not earn an Oscar nomination.

That said, it is even rarer for a Male Lead SAG winner to walk away without an Oscar in the same year. Seventeen of the 20 Male Lead winners to date have also won Best Actor Oscars.

So what does it all mean?

We're more than likely to see one of the recognized names take home an Oscar in February — my money is on Julianne Moore for Still Alice (a wonderful performance, tragic material, and the "unsung hero" story all add up to good fortune for the actress) and Eddie Redmayne for The Theory of Everything (the Academy loves a good physical transformation). But will the rest of the categories stick come time for the Oscar nods to announce?

The Female Lead seems like a pretty solid grouping, but the odds have it that one of these ladies will be usurped by a separate performer. The one to go would be Aniston, whose pull thus far is the most "non-movie-related." Plausible candidates to take her place (in descending likelihood): Marion Cotillard for Two Days, One Night, Amy Adams for Big Eyes, Gugu Mbatha-Raw for Belle (Beyond the Lights love might even bump her up above Adams), or — heck, let's shoot for the moon — Tilda Swinton for Only Lovers Left Alive.

Over on the Male side, I'm a firm believer that Gyllenhaal, good as he is in Nightcrawler, won't make it to the Oscars short list. He could easily be bumped out by David Oyelowo for Selma (far and away the strongest contender... so much so that it's quite bizarre that he didn't land a SAG nod).

While I can't anticipate an Oscar season that doesn't nominate Oyelowo (for quality and nature of the performance alike), there is still a possibility of room for other additions to the list. The past couple of months have seen the heated love for Carell's "dark turn" temper quite a ways; I wouldn't be surprised if he was relegated to a Supporting Actor position, or even omitted altogether.

If Carell loses his seat, we could see any of the following step in for a nod, though almost definitely not a win (again, descending likelihood): Oscar Isaac for A Most Violent Year (making up for his Inside Llewyn Davis snub), Timothy Spall for Mr. Turner (the "classy" vote), Ralph Fiennes for The Grand Budapest Hotel (for my money, one of the best performances of the year), and Ellar Coltrane for Boyhood (odds are highly against it, but that movie has a ton of love coming at it from all angles). However, staying true to the numbers, I'll allow Carell his expected place among the Academy nods.

So there you are, a few facts and theories to consider when filling out your own Oscar ballots. Best of luck, and power to you if you're instilled with enough Swinton-love to pencil her in for a nod.