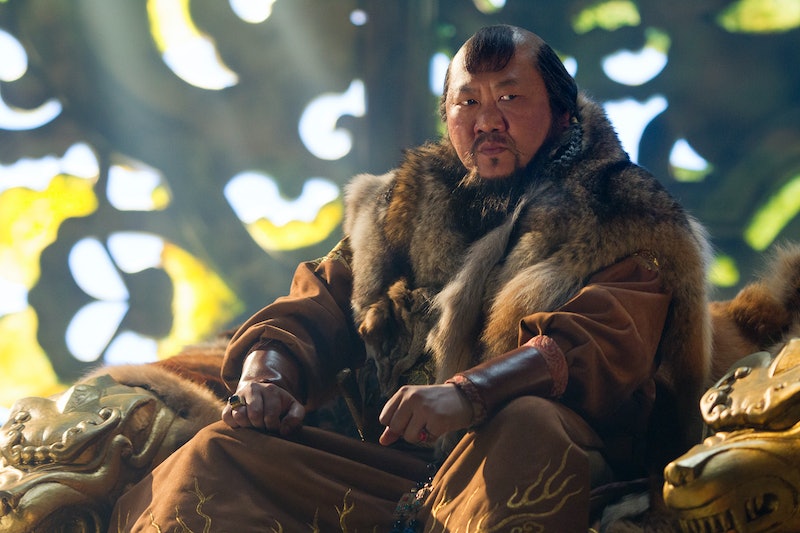 When you have a direct lineage to Genghis Khan, you might find that people have certain... expectations of you. Conquering entire peoples, laying waste to whichever towns you come across, that kind of thing. That's a lot to live up to. But Genghis' grandson, Kublai Khan (a historical character in Marco Polo, Netflix's newest series) chose a different path to greatness and power — and became the longest-ruling khan (or Mongol monarch) in history. To understand how unusual his time presiding over the Mongol empire was, you've first got to learn a bit about his family history.

At its biggest (around the year 1370), the Mongol Empire was "the largest contiguous empire in world history," according to AllAboutHistory.org. It stretched, without breaking, all the way from modern day Eastern Europe, through all of Asia and the Middle East, only stopping at the far border of China and the Pacific Ocean. Unbelievably, this entire civilization was established in just three generations, beginning with our old friend Genghis, through his son Tushi, and completed by his grandson, Kublai. As I'm sure you've already guessed, building so great an empire (not to mention subjugating all the hundreds of different peoples and countries that exist between Europe and China) was not a peaceful affair.

The Game of Thrones Connection

If you're trying to imagine what the Mongols were like in the 14th century, think of Game of Thrones' Dothraki: nomadic horse lords whose culture values skill in fighting above all. In fact, on George R. R. Martin's Livejournal (yes, he is literally the only person in the year 2014 to still have a LiveJournal), the author commented that the Dothraki are partially inspired by the Mongols, along with other plains-dwelling peoples throughout history.

Here's a glimpse of how Marco Polo will portray Kublai Khan (Benedict Wong) and the rest of the Mongol empire:

By the time Kublai came on the scene, his father and grandfather had done most of the conquering there was to do in the world. But there was one trophy still left to him: China. In 1260, according to History.com, Kublai gave himself the title of Emperor of China (in addition to his responsibilities governing the rest of the known world), then set about convincing the Chinese to accept him as their ruler. I imagine his argument went something like this:

China Was Pretty Into Him

To get on China's good side, he employed strikingly different tactics than his older relatives. He allowed local and regional governments to continue leading themselves, and he also arranged for traditional Confucian religious ceremonies and practices to become part of the operation of his court, according to History.com. He even moved his capital city from Mongolia to Taitu, an ancient Chinese city near what is now Peking. Basically, he was such an accommodating conqueror that the Chinese citizens were pretty OK with him taking over their country, and many important Chinese figures even offered to become part of his council. (Anyway, at that time China was more a series of autonomous regions sharing a common culture rather than one unified country, but I digress.)

Was He Buds With Marco Polo?

So how does all of this history relate to Marco Polo, the namesake of Netflix's new show? Well, Polo was one of Europe's greatest explorers. Before he set off in the 1270s to see what this whole "Asia" thing was about, pretty much no one from his part of the world had any kind of contact with people from foreign lands. According to Biography.com, Polo met Kublai during one his earlier trips, and the two became pals. They even negotiated trade routes from Asia to Europe (aka the Silk Road). Polo is also the only person to have written a first-hand account of what Kublai and his court was like, according to Biography. It's because of him that we know so much about the greatest khan of all time. And if that wasn't enough of a contribution to society, Polo also bequeathed his name to a great aquatic children's game. What a champ.

More like this
Watch The Thrilling Teaser Trailer Of 'Shadow And Bone' Season 2
By Gretchen Smail, Jack Irvin and Sophie McEvoy
A New Portrait Shows King Charles With William & Kate Before The Queen’s Funeral
By Stephanie Topacio Long
Buckingham Palace Shuts Down Rumour About King Charles III's Coronation
By Sophie McEvoy and Sam Ramsden
Holly Willoughby & Phillip Schofield #Queuegate Drama, Explained
By Sophie McEvoy
Get Even More From Bustle — Sign Up For The Newsletter