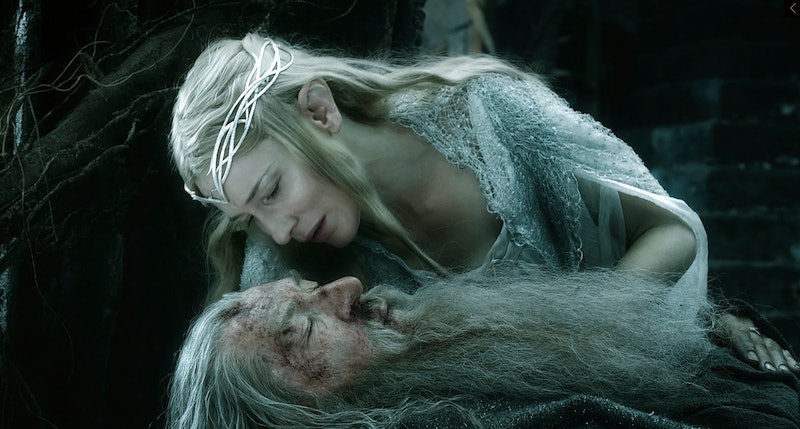 In Battle of the Fire Armies, Galadriel and Gandalf pick up their subtle relationship right where it left off in An Unexpected Journey. When Gandalf goes to Rivendale to enlist the help of the elves and Galadriel promises to come to his aid whenever he requests it. She simultaneously gives Gandalf a pretty touching face stroke that would have launched a thousand fanfictions if there weren't already a significant base rooting for the two to get together ever since reading the books.

The Battle of the Fire Armies has Galadriel keeping her promise and coming to help Gandalf after he encounters Sauron in The Desolation of Smaug, but then their "relationship" progresses a step further. And by "further," I mean Galadriel carries Gandalf like a damsel in distress and, later, Gandalf stares longingly at her before asking her to come with him and calling her "my lady" rather tenderly. (She doesn't, because she's got to kick Sauron's butt instead.) I mean, really, the only way you can't hear the romantic music playing gently in the background of these moments is if you actually read the books or saw the original trilogy and are incapable of thinking of Gandalf as a particularly romantic character.

However, there's not necessarily anything wrong with that. It's clear that Gandalf and Galadriel have an unbreakable bond that transcends petty labels like "platonic" or "romantic." They're loyal to one another, they understand one another, and they're there for one another when it counts. There's a beauty in their relationship as it is, no matter how you choose to define it, and you can certainly find evidence to support both conclusions in the books. (Except the truly definitive evidence, like them making out and riding off into the sunset together. Although they do leave Middle Earth together with Frodo, Celeborn, Bilbo, Elrond, and possibly Shadowfax, so make of that what you will.)

More like this
Nicola Coughlan Shared A Lady Whistledown Excerpt From ‘Bridgerton’ Season 3
By Grace Wehniainen, Alyssa Lapid and Sam Ramsden
Everything You Need To Know About 'Rings Of Power' Actor Charlie Vickers
By Darshita Goyal
Viserys’ Fate On 'House Of The Dragon' Could Differ From The Book In This Surprising Way
By Grace Wehniainen
'The Lord of the Rings: The Rings of Power' Revisits Iconic Spots From 'The Hobbit'
By Darshita Goyal
Get Even More From Bustle — Sign Up For The Newsletter