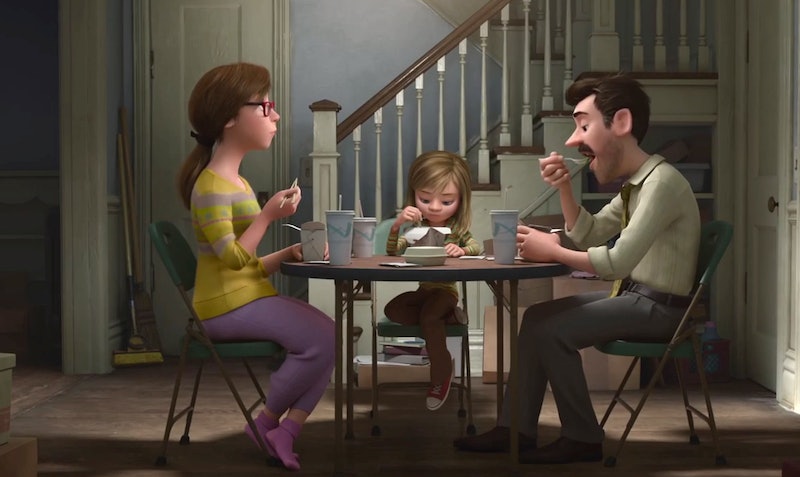 Ever wonder what makes your parents act the way they do? Pixar is exploring that idea in the new trailer for Inside Out. Essentially it's a story about all the emotions your body possesses and how they're basically sitting up there in your head controlling you, but being super adorable and funny whilst doing so. (I mean, it stars the likes of Amy Poehler, Mindy Kaling, and Bill Hader as the personified feelings, how could it not be hilarious?)

The new teaser for the movie explores what on earth is going on inside the head of an adult, and it's exactly as you've always suspected. It turns out parents have no idea how to respond to situations either and are just as clueless as kids are. The sneak peek shows the teenage daughter sitting down to dinner with her parents who then ask the dreaded: "How was school?" (I hated that question as a kid because I just lived school I didn't want to rehash it all.) But after the daughter's annoyed response triggers the emotional center in the mother we get to see just how much of parenting is making it up as you go along.

"Something's wrong," one of her little emotion characters says in a panicked mom voice. She then tries to signal the father to get his help on this. All of the dad's emotions are watching sports, so when he does join the conversation he's really out of the loop. This frustrates his daughter even more until both sets of their emotions are just trying to outdo each other in anger because they don't know how else to react to the situation.

So next time your parents annoy you or make you mad, remember that they don't really know what's going on either—they're just pretending along with the rest of us.

Check out the cute clip below:

More like this
12 ’90s Movie References You Missed In 'Do Revenge'
By Radhika Menon
Harry Potter's Viktor Krum Has Undergone A Huge Transformation Since Hogwarts
By Sam Ramsden and Meguire Hennes
Stanley Tucci Is Next Level In The BBC's 'Inside Man' Trailer
By Sam Ramsden and Sophie McEvoy
What Does Nancy Jo Sales Think Of 'The Real Bling Ring'?
By Arya Roshanian
Get Even More From Bustle — Sign Up For The Newsletter