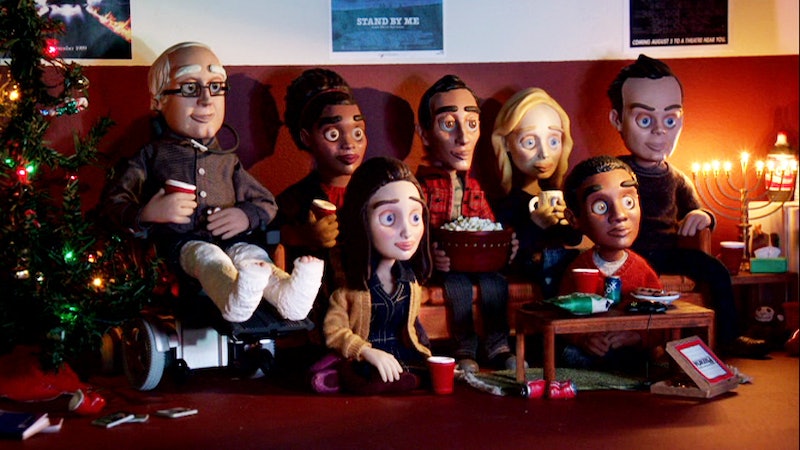 It's December 10th! Which, as Community fans know, marks the five year anniversary of the first Community Christmas special, as well as the five year anniversary of Jeff Winger getting punched in the face. Oh, how the time flies. In honor of this, the hashtag #HappyDecember10th has hit the internet, urging us to don our gay apparel for this important occasion. Beyond that, I couldn't think of a better way to celebrate the day is to acknowledge all the great things Community holiday episodes have taught us.

Oddly enough, yesterday, December 9th (coincidentally the day Abed and his mom sit down and watch Rudolph the Red-Nosed Reindeer every year) I actually sat down with my brother and did a Community Christmas special marathon. It really took me back to the days of innovative animation-based parody, heartwarming story-arcs hidden in amped up silliness, and the generalized flatlining disappointment of season four. For the most part (see: flatlining disappointment of season four), Community Christmas is the best kind of Christmas there is. And it was from this binge-watch, that I was able to gather the following eight important (yet occasionally contradicting) lessons about the Christmas season from our very six favorite human beings. Cool. Cool cool cool.

Be Tolerant of One Another's Beliefs, Even If They Don't Mesh with Yours

Whether that means Abed's belief that he gets 72 virgins in heaven, Britta's belief in nothing or Pierce's belief that he can become a level-five laser lotus in his "Buddhist" community, it's important to realize that not everyone celebrates Christmas the same way you do, or at all, even. When staunchly Christian Shirley pushes her religious views, guilting Jeff with lines like, "So, why do you hate me and Jesus?" it isolates her from the entire group.

Simultaneously, Don't Worry, The PC Police Aren't After You

You don't have to go the polar opposite and demote the holidays to a faceless, vague concept, like the Human Being strung up with icicles. Said tolerance is great, but if you say "Merry Christmas" instead of "Seasons Greetings," most people will just take it at face value and chalk it up to good will.

Support Each Other Through Christmas Chaos

I don't know if you have to play along with a Rankin/Bass-styled psychotic break, per se, but if something traumatic happens during the holidays, step up to the plate and help out. This could be as simple as watching Elf with a friend after a particularly rough shift working retail.

The Sexy Santa Thing Can Only Go So Far

I don't know if all male viewers would agree with this, but both me and Jeff Winger were definitely side-eying Annie's tarted up, brainless Christmas song. I mean, Annie's boobs (the actual boobs, not the monkey) have never looked better, but it gets tired by the end of the bit.

There's Always Room For One More at the Table

The weird Christmas-in-April episode from the gas leak year shows this, when Professor Cornwallis reveals that he had been keeping himself hostage the entire time out of loneliness. They then formally embrace him into their holiday party, and he gifts them a generous C+ for their paper. Yeah. Good lesson, still kind of the weakest link when it comes to Community Christmas.

Yeeeeeah, it's really hard to watch when your aunt, antlers-on-head, gets drunk and starts shaking to "Jingle Bell Rock." It's more painful when we have to watch Britta, you know, Brittas the Greendale Christmas pageant. Regardless, the holidays are the time to let that stuff slide. As Dean Pelton says, "Greendale is an all-inclusive school, why don't we let Britta do her awkward song?"

You Can Choose Your Own Family

Some people could argue this, but honestly, I haven't had a traditional "family" Christmas in over a decade. The Garis's LIVE for misfit Christmas, and every year all our divorced friends, our Jewish friends, or whomever needs a home for the holidays spend the day partying with us. Likewise the clan of Community choose to spend the Christmas (or December 10th, or December 9th) with each other, the people they really love most.

And Finally, the True Meaning of Christmas is in the Simple Belief That it Has Meaning

Whatever that meaning may mean to you. Thanks, Lost.