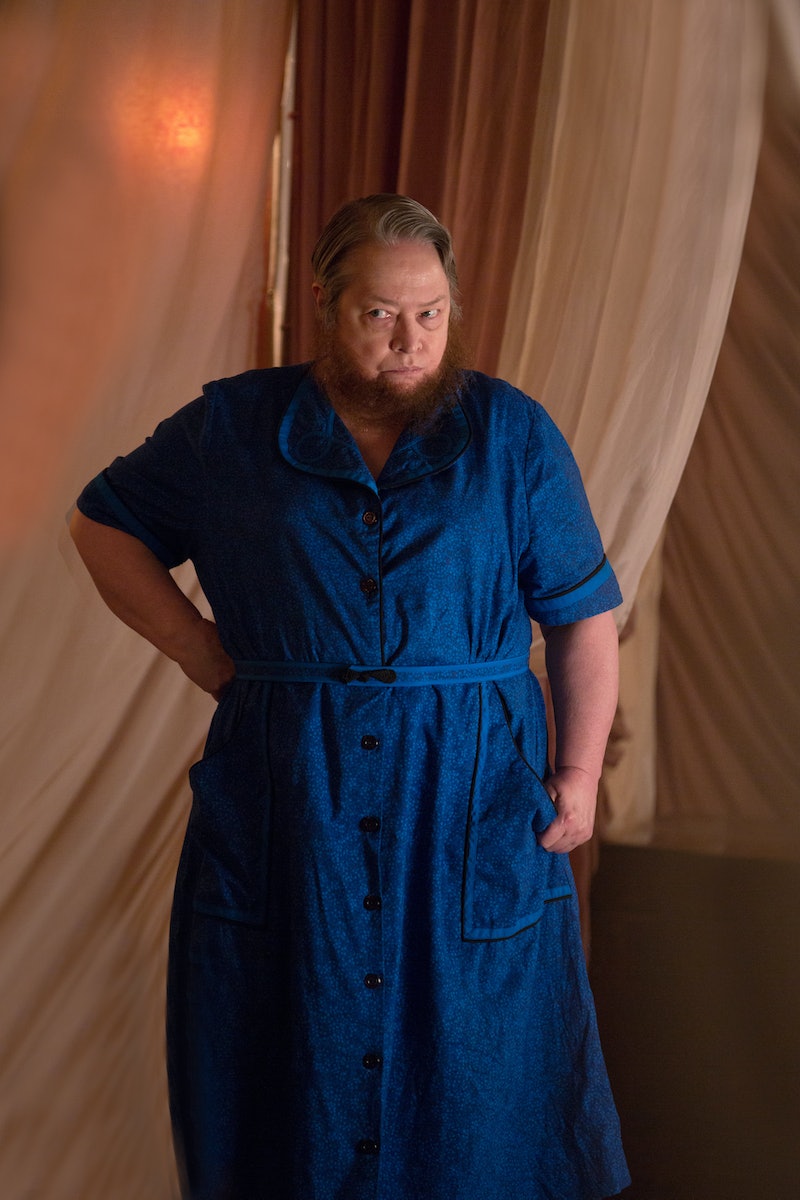 Ryan Murphy may drive us insane throughout the course of every American Horror Story season, but he generally gets us good when it comes to twists and turns. We rarely see anything coming (sometimes because his twists come out of left field — ahem, Penny), and the twisty journey always manages to veer so far from where it started that trying to trace its steps ahead of times is practically futile. However, I have the audacity to believe I may have guessed the conclusion (or at least part of it) this year. This is how AHS: Freak Show will end... probably.

OK, in truth, I won't be trying to piece together everything that will come about in the finale — I'm not a maniac or a premonitory genius. However, I've settled upon a theory for the woman running the damn show: Elsa Mars. And her end will not be pretty.

First off, let's consider that she is basically Freak Show Fiona Goode at this point. Extract eternal youth and Supremehood and insert Hollywood fame and a killer singing voice in its place and you've got Elsa. Now, she's nearly killed Paul (and refused to call the doctor after throwing a knife into his stomach) and she's killed Ethel (as well as completely mutilating Ethel's body in order to cover it up). She's earned a grim end.

Secondly, her scene with Edward Mordrake, in which she was spared death because she showed remorse for her now mild transgressions in life, was a Chekov gun of gargantuan proportions. Now that Elsa's gone bad for real, the Mordrake pardon has to come back in some way (luckily, we already know that Murphy has confirmed Mordrake's return, with Twisty in tow). But, there's a twist: When Bustle spoke to Kathy Bates on a call with reporters, Bates was tight-lipped on the topic of whether or not Ethel was really gone for good. And while Murphy has said that dead means dead on AHS this year, that was before he introduced the walking loophole that is Edward Mordrake and his legion of dead freaks.

If Bates won't say definitively that she's not coming back, and Twisty gets to come back, couldn't that mean Ethel will be in tow? Surely Bates would just deny the return if she wasn't coming back. I mean, it almost wouldn't be fair if she didn't get to come back and face her former friend-turned-murderer. Plus, Angela Bassett may have slipped up in an interview with Vulture recently. She said:

Anything could happen in this world, and anything does happen. I mean, you could get your head cut off and come on back!

Beheaded characters could come back? Hmm. Wasn't Ethel's character beheaded when Elsa covered up her murder? Yes — and rather spectacularly at that. Couldn't it be possible, that while looking for an example to explain how surprising this Freak Show realm is, Bassett blindly grabbed an example off the shelf of real happenings from Freak Show? (Bates was also beheaded on Coven, where her character lived on despite the lack of a body, so Bassett could be referencing that, but that seems a little unlikely.)

I will admit that bringing Ethel back would mean the rules of this Edward Mordrake deceased freak legion are a little loosey goosey, since the idea was that his freaks are people he takes into the afterlife. But would you expect anything less from the show that brought literally everyone who died back to life in Coven? Besides, throwing in the return of Mordrake and Twisty without Ethel doesn't entirely make any sense otherwise. While Twisty was wasted by leaving so early on, it's clear now that his purpose was to spur the real villain, Dandy, into his new blood-bathing ways. Does Twisty really need to return? From where I sit, no. But Ethel? That woman deserves a little revenge.

Of course, the Mordrake redux could be a ploy to take Dandy to the great beyond, but that would be entirely lame. He may be the most terrifying handsome killer yet, and his tastes are wildly bloody. He needs to go down spectacularly. Elsa on the other hand, just needs to go down. She'll be the spectacle all on her own. And who better to incite her caterwauling than Ethel? No one. That's who.