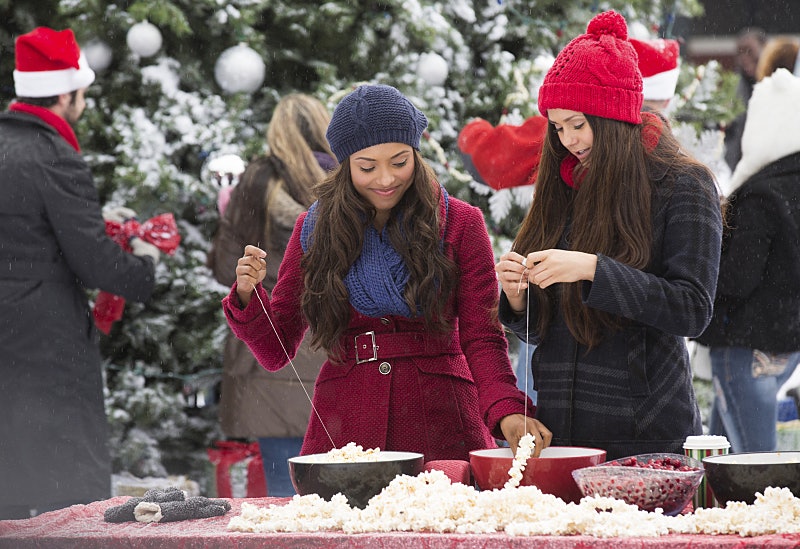 While most of the world's holiday traditions include things like trimming the tree and building gingerbread houses, the annual holiday activities in Mystic Falls usually go the way of murder rather than merriment. (Happy Holiday, everyone!) So don't let the happy-go-lucky flashback image above fool you. The Vampire Diaries Christmas episode "Christmas Through Your Eyes" (which also serves as TVD's midseason finale FYI), will stray far away from anything resembling peace, joy, and good will toward men (and vamps). In fact, given everything that I'm hearing about this less-than-jolly episode, I'd go so far as to say that a beloved TVD character will die by the night's end.

But before we dive into the fast array of speculation and spoilers, let's have a look at the episode synopsis as a sort of jumping off point. However, consider yourself warned, for the details definitely won't put your mind at ease.

With the holidays approaching, Bonnie attempts to replicate her favorite traditions, while reminiscing about happier times with her friends. Not able to return home to Mystic Falls for her favorite time of the year, Caroline is surprised when Sheriff Forbes brings the holidays to her at Whitmore College. Meanwhile, after discovering that Jo has gone missing, Alaric turns to Damon and Elena for help, while Liv and Luke find themselves at odds when Tyler approaches them with a risky plan. Elsewhere, Jeremy helps Matt carry out a plan to take down Enzo but grows concerned when Matt takes things too far. Lastly, Stefan is forced to break some devastating news to Caroline.

See what I mean? Add that along with a few spoilers I've heard along the way and I'm fully confident that another heartbreaking death is just around the corner. (Lord help us all.) And, not only that, but I have a pretty good idea of who it could be. So feast your eyes on all the Christmas episode spoilers below and be sure to stock up on tissues. You're definitely going to need them.

Sheriff Forbes Will Probably Be the One To Die

Paul Wesley recently revealed to E! Online that viewers should prepare themselves for a major, heart-wrenching death. "Dude, there's always deaths," Wesley warned. "There is a big one coming up, I will say that, there is a big one that's really going to break the people's hearts." Granted that alone doesn't narrow things down too well, but when you add in the part of the synopsis that said "Stefan is forced to break some devastating news to Caroline," you can't help but fear that her mother, Sheriff Forbes will be the one up next on the TVD chopping block. We shouldn't really be that surprised though, considering it wouldn't be the first Christmas episode to result in a mother's death… like the time Klaus straight up murdered Tyler's mother back in Season 4.

Notice how "Have Yourself a Merry Little Christmas" was playing in the background? I'll never be able to think of that song the same way again. Thanks, TVD. (Also, RIP Carol Lockwood.)

Further proving that Liz Forbes' fate is sealed, Thursday's episode promo features Stefan holding a certain blonde in his arms (we don't see her face, but let's assume it's probably Caroline) with a pained look on his face. Almost as if he too is mourning something. And while death is certainly tragic, it also has a way of bringing people together who may currently be on the outs, which is something executive producer Caroline Dries promises will happen between Caroline and Stefan.

“Their friendship has been through a lot this season, and [Stefan] decides that not only does Caroline need to learn something she doesn’t want to learn, but that he’s the one who should tell her the news,” Dries tells TVLine. "What we’ll come to see in the next few episodes is that their relationship will be shaped by this.” And Liz's death could be the very thing to ignite that spark.

Tyler Could Become a Werewolf Again

Granted, I don't really have too much proof to back this up, but it's just a feeling that I have. I mean, we all know it's bound to happen eventually and I think it would be rather fitting if Tyler willingly made the sacrifice in order to protect Liv, either from Kai or from her brother Luke. And, not that this is a huge indicator, but when TVD returns on Jan. 22 the episode title is “Woke Up with a Monster." Now I'm not saying that Tyler is necessarily the monster in this scenario, but if the full moon fits…