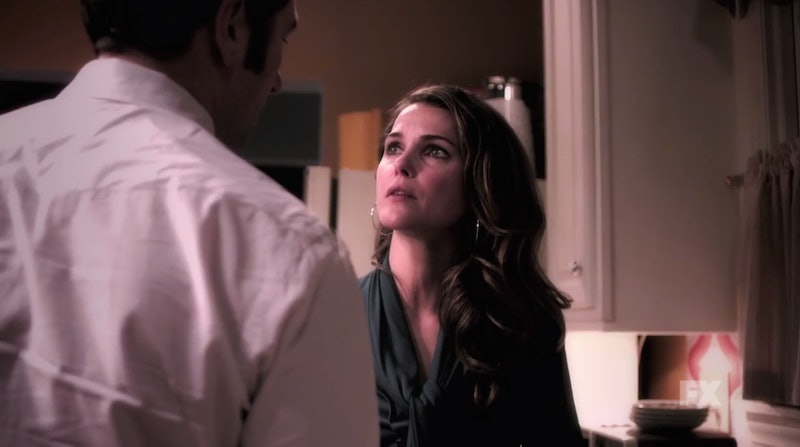 It's only been one day since the series made the American Film Institute's prestigious, yearly list of the best television shows of 2014, but it looks like we already have solid proof of what persuaded AFI to make their pick: The new trailer for season 3 of The Americans has been released by FX and it's truly what quality television looks like.

Featuring a verse from The Police's classic '80s song that sounds more like it was written about a stalker, not a love interest — "Every Breath You Take," that is — the trailer is short, but perfectly captures the lives that the Cold War drama's main characters: A fake family (starring Keri Russell and Matthew Rhys) of Russian KGB spies living in the US under the cover of being the perfect American family.

The only sad thing that this trailer presents? Season 3's premiere date. I don't know about you, but after watching that trailer, I'm pretty much in desperate need of season 3 right now — but, sadly, it won't be available until FX premieres it. Sadly, that doesn't happen until Jan. 28, meaning we'll all have to wait until next year for new episodes.

Until then, check the trailer below.

More like this
An 'Everything Everywhere All At Once' Star Just Joined The 'Loki' Season 2 Cast
By Grace Wehniainen
Here's When 'The Crown' Season 5 Will Premiere — And What To Expect
By Bustle Editors
Paul Mescal, Man Of Mystery
By Samantha Leach and Heather Hazzan
What’s New On Netflix: Ana De Armas’ 'Blonde' & A Nick Kroll Special
By Arya Roshanian
Get Even More From Bustle — Sign Up For The Newsletter