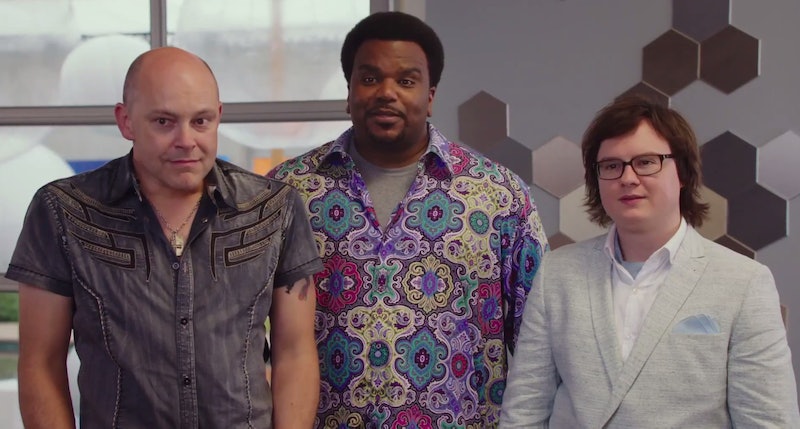 Dare I say it? I dare, folks: The new Hot Tub Time Machine 2 trailer is here, and, amazingly, after watching it, I think I actually want to see this movie now. Though sequels are generally pretty lame and can be overkill when tacked on to a perfectly fine first film, this one actually looks even funnier than the first — and I can't even deny it, I laughed a few times while watching it as well. As someone who rarely actually laughs when watching something on my laptop, that's a huge feat for me.

Featuring the first film's stars Craig Robinson, Clark Duke, and Rob Corddry — John Cusack couldn't make it back for the sequel, I guess, which is a shame — as well as new cast members Adam Scott and Gillian Jacobs, the film seems as if it'll pick right up where we left off with the three buddies, who found themselves a time-traveling hot tub during the first film and accidentally ended up back in time, in the '80s. Except, instead of living normal lives after the close of the first film like audiences likely assumed, it seems that the three have used the time machine to go back in time and invent things like the Internet so they can be filthy rich. Selfish and wrong? Sure. But you can't even front that you wouldn't totally do the same thing if you had a time machine (I mean, I know I would).

Sadly, we'll have to wait until Feb. 20 to actually see the film when it's released in theaters — but at least, until then, we have this trailer. Check it out below.

More like this
12 ’90s Movie References You Missed In 'Do Revenge'
By Radhika Menon
Netflix Reveals First Look At Wednesday In The 'Addams Family' Spinoff Series
By Bustle Editors
The Trailer For The Whitney Houston Biopic Has Twitter Feeling Heated
By Radhika Menon
What Does Nancy Jo Sales Think Of 'The Real Bling Ring'?
By Arya Roshanian
Get Even More From Bustle — Sign Up For The Newsletter