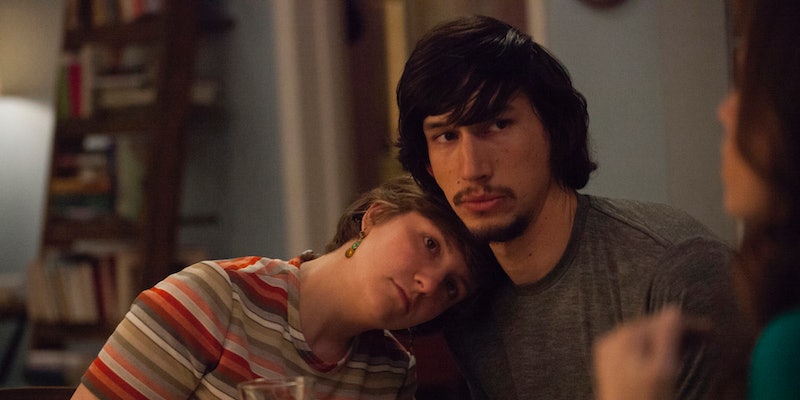 Our patience was finally rewarded Sunday night when Girls returned to HBO on January 11 for its highly anticipated fourth season. The premiere saw Hannah Horvath going off to grad school in Iowa without Adam, Marnie sleeping with the (not single) Desi, Jessa in a foul mood, and Shosh finally graduated. It's hard to say where season 4 will go, but it seems safe to say there will be romantic drama.

After all, when season 3 ended, the future of Hannah and Adam was still up in the air. She had been accepted to the University of Iowa — and we all know that Iowa City is one hell of a hike from New York City. Shosh, having found out that Marnie and Ray were sleeping together, pleaded for Ray to take her back, but was rejected (though in my opinion, Ray should thank his lucky stars that any of these women is giving him the time of day). Marnie, clearly into that guy she’s been singing with, Desi, was confused by a kiss they had after a successful show, because Desi is already in a relationship. Finally, Jessa, everyone’s favorite “adventurous” woman, had a very small story line in season three which was more about getting her life back in order, and less about her defining her life with a man.

I'd argue that where Girls especially thrives in is its portrayal of what relationships and dating look like when you’re in your 20s. With every stumble that each character makes in their relationships, there is a lesson to be learned, no matter how cringe-worthy. Let's take a look at the 31 relationship lessons we've learned so far from Girls.

When You’re the One Who Ends a Relationship, Stick to It

It’s important to stand by your gut decision. I mean, Marnie did break up with Charlie, but she let her loneliness get in the way of her decision. What followed was a hot mess.

If You Regret Your Choice, Don’t Show Up at Your Ex’s Work and Break Out in Song

Especially a rap. Don’t rap. I repeat: Don’t rap. But, for reasons we'll never know, Marnie decided to rap Kanye West's "Stronger" at Charlie's work party as some weird attempt at, well, getting him back? Either way, despite embarrassing herself and making the audience cringe, Charlie took her rapping ass back.

Steer Clear of Dating People Who Don’t Share Your Politics

I feel like this should just be a given, but some people, man. Hannah, the bleeding-heart liberal, should have really known that dating a conservative, even if it is the adorable Donald Glover, was going to end badly.

But If You Do, Never Discuss Politics...

Like, ever. Especially don't bring up gun control mid-make-out session.

Most Specifically, the Stuff You Have Zero Clue About

When Hannah could see that she was losing the argument, she spewed out a bunch of random facts, quoted Missy Elliot, then lied about not knowing who Missy Elliott is, and finally ended with the ridiculous "Well, I don't see race" card.

Never Marry Someone You Just Met...

I mean, give it at least three months. Jess was probably hoping for some sort stability in her life, and TJ was definitely hoping to secure his place in Cool World. Shockingly, it didn't work out.

Unless you’re into polyamory, then by all means!

No matter how great their Brooklyn brownstone is or how cute they are.

If you have a story about that “one time I asked someone to punch me in the chest and then come on that spot,” then save it until at least three weeks in to the relationship.

Or Talking About Being Together Forever

Yes, great brownstones have that effect on people, but move on! Hannah, you will find and get "all the things" someday with someone else.

Especially if you ever want to get back together again. Shosh is as lovable as can be, but in real life, no one wants to be Shoshanna.

And If You Do, at Least Explain the Emojis in the Following Text

Because honestly, a panda next to a gun next to a wrapped gift really does make no sense at all.

When You Find Out You Have an STI, Ask Questions Before Placing Blame

If only Hannah had maturely broached the subject after her HPV diagnosis, then she could have avoided the argument that followed. But maybe hearing Adam use the phrase "dick doctor" as he declared his innocence was totally worth it.

But If It Turns Out Your Initial Blame Was Appropriately Directed, Then By All Means Get Angry

You have every right to be pissed. Adam should have been honest with Hannah about the fact that he was sleeping with other women.

Actually Asking Your Partner About Themselves in the Early Stages Is Really Important...

It's called the "getting to know them" period. Although Hannah had a really hard time, especially in the beginning, forming sentences that didn't start with "I."

Does Hannah even know now, after all this time, where Adam is from? I still don't recall her asking.

Or What Their Dreams Are?

Um...other people have dreams, too, you know. Hannah, far too obsessed with Hannah, just couldn't bring herself to realize that Adam, like most people, is more than just a pretty face.

And Maybe Some Intimate Details Like Whether or Not They're in AA?

It was only after running into Adam randomly at a party in Bushwick that Hannah realized Adam was sober. He blamed this on the fact that she never asked him anything about himself.

Sometimes, Your Idea of a Relationship Is Different Than Your Partner's

So, so, so different. Marnie really thought she and Booth Jonathan had something special after that "look at the doll, describe her" afternoon romp.

Like, Sometimes, You Really Are Just the Friend with Benefits...

I know, I know, it felt like the real thing. I've been there, too. Further proving Marnie's delusion when it comes to relationships, she couldn't see that Booth just wasn't that into her for the long run.

Or, Even Worse, Just Their Assistant

It was only after Marnie played perfect host to Booth's party and called him her boyfriend that she realized she was just another assistant, at least in his eyes.

Hooking Up With a Friend's Ex Is a Bad Idea...

But Marnie, on her rampage of trying to find some solace by being wanted by men, seemed to forget this when she went to bed with Ray.

Even If That Ex Is Gay

Then there was the night that Marnie almost slept with Elijah, who's not only Hannah's ex, but was in a relationship at the time. Oh, Marnie.

And Especially If Your Friend Still Might Possibly Be Into Them

You can never be too safe in these instances, so just don't. And based on Shosh's response to finding out that Marnie and Ray were sleeping together — she asked for him back — Marnie was beyond wrong.

Being With Someone Who Constantly Surprises You Is a Good Thing

It was pretty strange to see Adam so emotional at Jessa's wedding, but it gave a beautiful peak into the person he is.

And If they Wear Their Heart on Their Sleeve, Then Even Better

Expressing emotions isn't easy for many people. When someone you care about does it, relish it. It took Adam a very long time to get to that place where he loved Hannah, but when he finally did, he had no intention of letting her go.

In The End, It's About Being with the One Who Makes You Laugh

Through it all, Adam and Hannah are always able to make each other laugh.

And Challenges You In More Ways Than One

Yes, even if it is running, or something equally awful. Adam evens out Hannah. He pushes her both physically and mentally. That's the kind of person you want around.

You Should Value Someone Who Always Tells You the Truth

Adam may have some odd concepts, but he always has Hannah's best interests at heart.

And Thinks Even Your Complicated and Messy Bits Are Awesome

It may have taken them awhile to warm up to your less-than-appealing traits, but high-five them for finally getting there. Adam finally reached that place of loving Hannah, and what does he get after lecturing about her annoying insecurities? He gets hit by a truck.

But Most of All, Sometimes, Letting Go Is the Biggest Act of Love of All

Let's just see if these two crazy lovebirds can keep it together through season four. Sure, Iowa City isn't around the corner, but it's not in Thailand either.

More like this
'Grey's Anatomy's New Intern Got Advice From Dr. Bailey Herself
By Grace Wehniainen
Kevin Kreider Finally Asked Out Kim Lee On 'Bling Empire'
By Brad Witter
Khloé Kardashian Is Reportedly Dating A Private Equity Investor She Met Through Kim
By Jordyn Tilchen and Jake Viswanath
Rhys Ifans Has A Good Reason For Keeping His Love Life On The DL
By Maxine Harrison
Get Even More From Bustle — Sign Up For The Newsletter