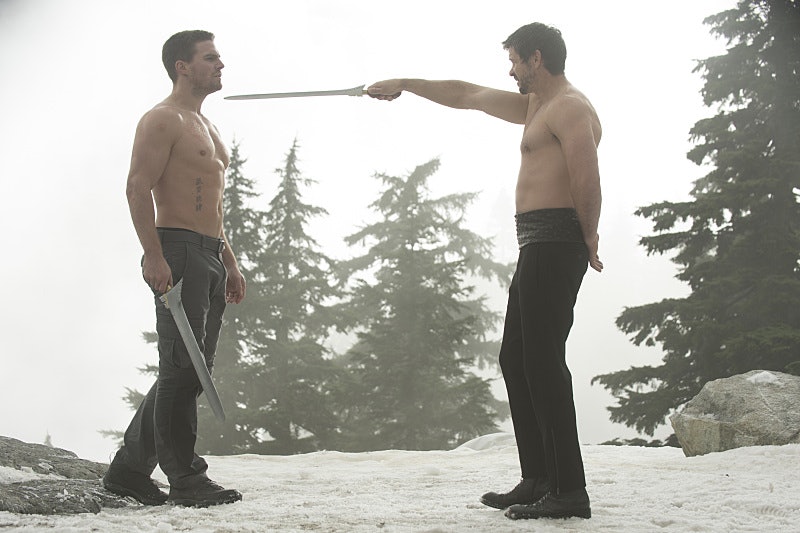 We were warned that the Arrow midseason finale would be full of a massive cliffhanger, but I can honestly say I was not at all prepared for the truly epic bombshell Wednesday night's episode of "The Climb" delivered. I might as well just come right out and say it: Thea killed Sara Lance. Even as a right it, I still have a hard time believing it. I just can't wrap my mind around it. I mean, I knew it was always a possibility given her recent training with Malcolm Merlyn, but for Oliver's little sister to now be a full-blown killer is almost too much to comprehend. But, as always with this show, there's always a twist to the story. Let's back up for a minute.

As we knew would happen, Nyssa returned to Starling City with a message for Oliver from Ra's al Ghul: find Sara's killer or watch as innocent citizens are slaughtered. This, naturally, was enough motivation to get Team Arrow to really up their detective game and as soon as Felicity found Oliver's DNA on one of the arrows that killed Sara, I knew we were in trouble. After all, Thea does share Oliver's DNA. But still, I didn't want to believe. Then Malcolm Merlyn provided undeniable proof. He showed Oliver actual video footage of Thea performing the rooftop act. But the thing is, she was under the influence of a unique plant called Vetera, which makes those who consume it easily susceptible to suggestion and leaves the person with no recollection of what they've done.

So you see, in Thea's mind, she isn't a murderer even though her dear old dad made her one. He used his own daughter as a pawn and has officially become the worst father on the planet.