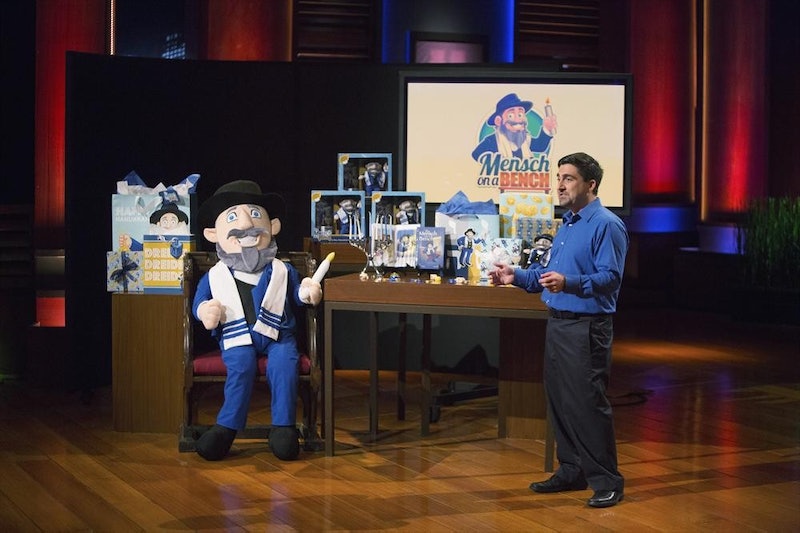 Gather 'round the TV, boys and girls. The Dec. 12 episode of Shark Tank is the annual holiday season-themed installment featuring products and services designed to keep your Christmas merry and bright. But as we all know, Christmas isn't the only holiday in December, and luckily Hanukkah will be represented with The Mensch on a Bench .

Unlike Christmas, Hanukkah doesn't really have iconic characters to help keep the traditions of the holiday alive. Nope, there's no Santa Claus, no Rudolph the Red-Nosed Reindeer, not even a Grinch. Mensch on a Bench is hoping to change that. This picture book by author and entrepreneur Neal Hoffmann is meant to be a way for parents to educate their children about the story of Hanukkah.

The holiday episode of Shark Tank is always a weird one for me. There's obviously so much cheer in this episode, but the sharks are generally not so into seasonal items since they're usually only profitable during a specific time of year. Still, if the sales are good, and the sharks believe in the product, regardless of their religious beliefs, The Mensch on a Bench may just have a chance.

Take a look at everything you need to know about The Mensch on a Bench below, and you may even want to make this book a part of your holiday tradition.

But before we get into the product, you may be saying to yourself, "But hold up. What exactly is a 'mensch'?" I'm glad you asked. "Mensch" is a Yiddish word for "a person of integrity and honor," according to the Merriam-Webster Dictionary. The word has close ties to the Jewish religion, which teaches followers to be a "mensch" by living moral lives.

The Mensch on a Bench is All About Tradition... Tradition!

So now that you know what the word "mensch" means, this should all make a lot more sense to you. The book follows the adventures of Moshe the Mensch, who was in that fateful temple where the miracle of Hanukkah took place, when there was only enough oil to keep the menorah lit for one night, but it somehow stayed lit for eight. Moshe the Mensch watches over that menorah in this story, and the doll of Moshe that comes with the purchase of the book is meant to watch over your menorah at home, too. Many have likened him as the Jewish version of the Elf on the Shelf.

You Can Bring Moshe Into Your Home Now

This year, Hanukkah begins on Dec. 16 at sundown and runs through the evening of Dec. 24. That means if you want to make The Mensch on a Bench a part of your holiday festivities this year, you better act quickly. Fortunately for many reasons, we don't live in the time of the Maccabees anymore, and you can have The Mensch on a Bench arrive at your door lickety-split just by ordering it online. You can order the book-and-doll combo through the official Mensch on a Bench store for $36 or on Amazon for $28.49. It's also sold in select Target, Barnes & Noble, and Bed, Bath & Beyond stores. In case you need even more Mensch in your life, you can also get the Passover book The Afiko Mensch and a 5-foot Mensch doll.

Mensch on a Bench Wasn't Funded by Gelt

Long before it was on Shark Tank, Mensch on a Bench sought funding from the people to get its start, namely on the crowdfunding website Kickstarter. The campaign met its goal and raised more than $22,000. And clearly this was something people wanted. After the first products were made, they sold out in two weeks.

Mensch on a Bench Has Competition

The Mensch on a Bench isn't the only Jewish toy to find inspiration in Elf on the Shelf. There's also The Maccabee on the Mantel , which is basically the same book-and-plushie combo idea but with a mini Maccabee helping to tell the story of Hanukkah instead.

I mean, when you're a mensch traveling all over the country, things are just bound to get crazy, and now we have photographic evidence to prove it.

Now, in the tradition of Mensch on a Bench's tagline, who's ready to put the "funukkah in Hanukkah"?

More like this
14 Scary Campfire Stories To Tell Your Friends
By Charlotte Ahlin and Kaitlyn Wylde
The 7 Best White Face Paints For Halloween In 2022
By Maria Cassano
The New Grey's Anatomy Interns Have Fans Feeling So Nostalgic For Season 1
By Brad Witter
The Best 'Grey's Anatomy' Intern Moments, From MAGIC to Glasses
By Grace Wehniainen
Get Even More From Bustle — Sign Up For The Newsletter