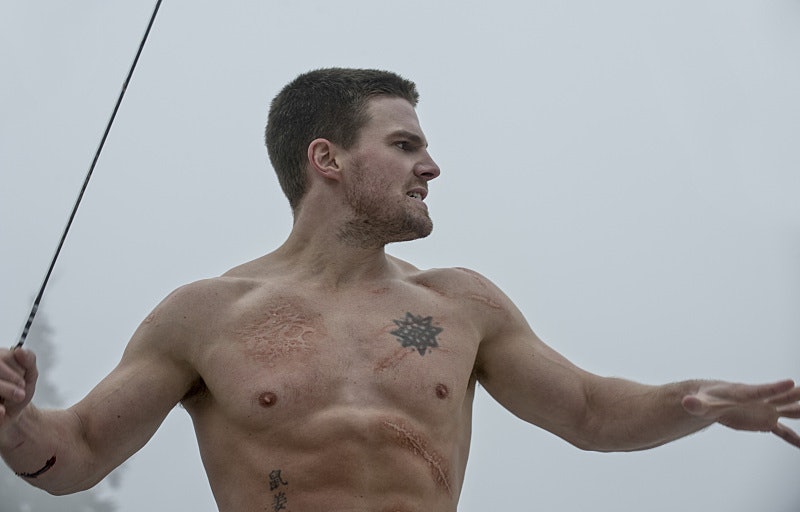 Somebody pinch me right now because I'm clearly experiencing the worst nightmare of all time. I mean, there's just no way that Oliver Queen is dead, right? After all, you can't have a show called Arrow without the Arrow. That's just pure insanity. But that didn't stop the Arrow midseason finale "The Climb" from making fans witness their beloved Emerald Archer get stabbed by Ra's al Ghul and fall, to what appeared to be, his death. However, I'm calling BS because I, much like Oliver himself, refuse to accept defeat.

After Oliver found out that Thea killed Sara Lance, I knew things were about to go from bad to worse. Knowing Oliver as we all do, there was no way he was going to allow his sister to take the fall for her murderous crime, especially since she has no recollection of ever doing it. (Though, to be honest, I think Oliver would've protected her even if she did.) So in true hero form, Oliver confessed to the crime himself, which explains how the two end up in hand-to-hand (or rather sword-to-sword) combat with each other. Only one man can survive.

And while I knew it was definitely risky, never in my wildest dreams did I think the writers would actually make the Arrow's death seem like a legit possibility. (Way to ruin a completely good shirtless scene, you guys.) But like I said before, there's just no way Stephen Amell is getting kicked off this show. Someone is going to end up rescuing him. Even in the January promo we see someone approach Oliver's body. And if you were paying close enough attention you'll notice he wasn't stabbed through the heart. No, Oliver will definitely survive. Just barely, mind you. But it will happen. I'm sure of it.

Now the only big question that remains is… who will come to Oliver's rescue? Maseo? Nyssa? Merlyn? Diggle? Any of these are completely possible. But unfortunately, we're going to have to wait all the way until 2015 to know for sure. Is it Jan. 21 yet?

Now if you'll excuse me, I have to go scream into a pillow. BRB.