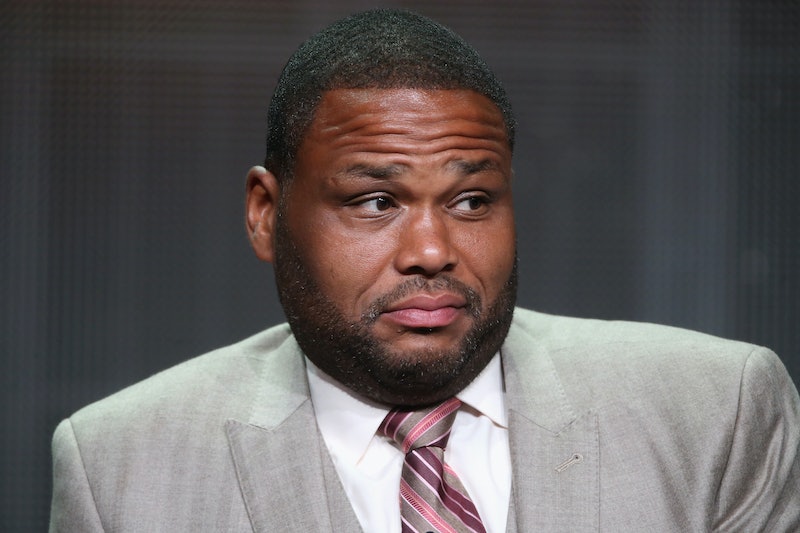 To put a red shiny bow on the run of holiday episodes they've been featuring for the past few weeks, black-ish 's Christmas episode has the desperate Anthony Anderson lobbying to be considered for the role of office Santa Claus, to the point of shoving his Mexican-American female coworker — who organized the office's Christmas celebration — out of the way based on a technicality. While Dre doesn't technically break any rules or do anything below the belt, he's a jerk about it. And so when she leads him to accidentally forget to fundraise presents for the local kids who are attending the party, I wish Dre was able to reconcile and apologize to her for his off-sides behavior, but instead he simply recognizes his mistake and fixes it for the kids.

Ultimately, it makes for a gentle take on realizing the reason for the season where instead of crediting Jesus, Santa is the one who gets the props in this episode. And, strangely, Mexicans, in a move that I hope doesn't offend Mexican-Americans in the audience. It does attempt to get at the heart of the strange relationship between Mexicans and the well-off in Los Angeles (a topic Chris Rock just tackled in an interview with the Hollywood Reporter ). It's well-intentioned, though, like I said a reconciliation between Dre and his coworker would have gone a long way.

It was a little weird to see that both this and the Thanksgiving episode were both about Bow clashing with Dre's mother Ruby about cooking soul food. I understand that their conflict is usually based on the clash of Ruby's 70s Black Power parenting and Bow's New Agey millennial helicopter parenting, but it feels a little repetitive. And Jenifer Lewis isn't quite as magical as Laurence Fishburne's Pops. She does fit into the ensemble but teasing that she was going to sing and not following through with it was cruel. This woman was one of the original Effies in Dreamgirls!

But it led to the amazing line: "Christmas isn't about getting everything we want. Or anything we want. It's about mom." The jokes came fast and furious this week, and you can't say that they got sentimental just because it was Christmas. If anything, the episode was kinda dark.

The sociological themes poked at how minority groups can often fight over getting what feels like a limited sliver of representation. And how even black men — who have things pretty damn hard — can benefit from the way things are, like being closer to the platonic ideal of Santa than a Mexican woman would be. And the awkwardness of Santa Claus in general for people who aren't white, but find themselves inventing this fake white man for their kids to look up to. And it all ended with the benign white lie that Ruby's big dinner was all prepared by a very nice woman who was working on Christmas Eve. That's a lot for a network show.

More like this
UK Viewers Will Have To Wait To Watch The Handmaid’s Tale S5
By Maxine Harrison
15 Offensive AF Jokes In 'Friends' That Really Aren't OK
By Tolly Wright, Bustle Editors and Meguire Hennes
10 Stranger Things-Inspired Halloween Costumes For True Fans
By Emma Carey
7 ‘Bridgerton’-Inspired Halloween Costumes You Can DIY
By Emma Carey
Get Even More From Bustle — Sign Up For The Newsletter