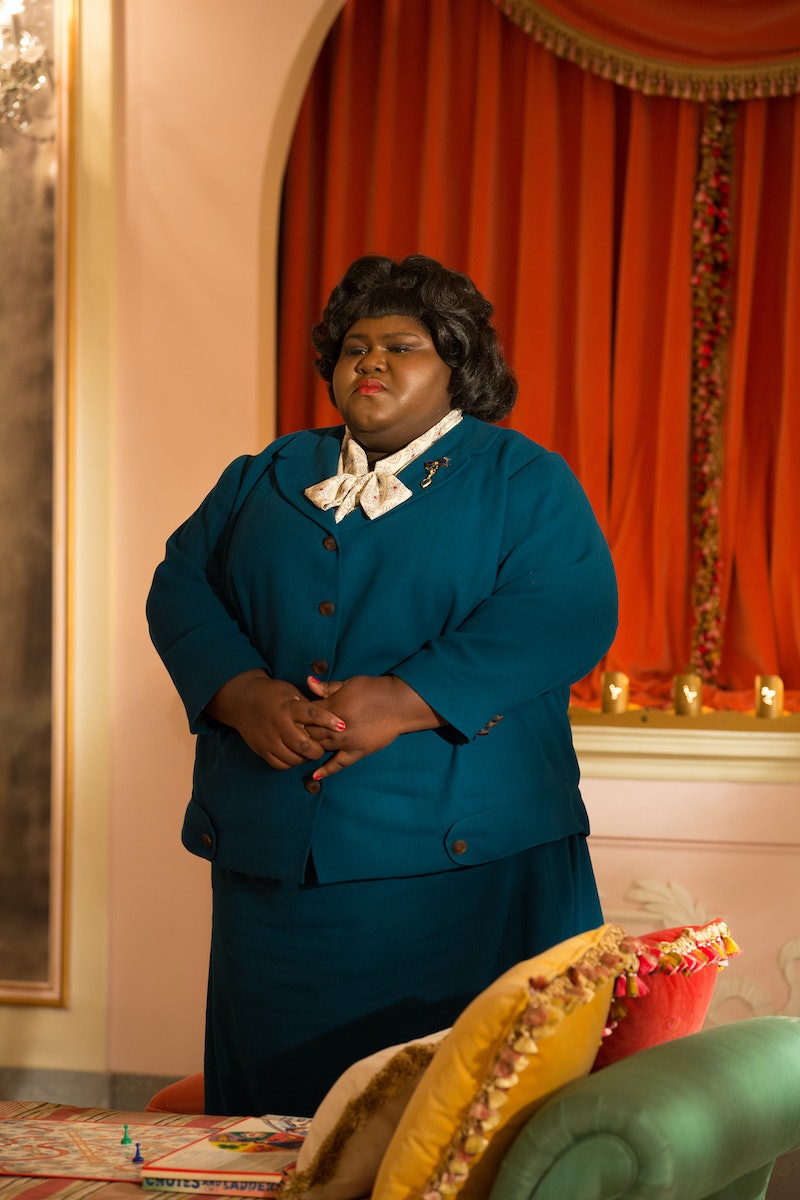 Just like her mother before her, Gabourey Sidibe's character Regina Ross is dead at the hands of one Dandy Mott on this week's American Horror Story: Freak Show. OK, so Regina didn't die from Dandy's physical hand, but she did fall thanks to the invisible hand of his privilege. While the scene was drawn with some broad strokes, it did contribute to the point the series has been trying to make all season: privilege lords over all.

It is frustrating that this message had to be presented by killing Sidibe — an actress who killed it during Coven, no matter how messy it all got. Her talents were spent having her yell at Dandy for being a child, only to have her die seconds later when Dandy offers the cop mountains of money to keep him out of jail. It was sickening, watching as Regina tried to get the detective to listen to her. Instead, he acts as if she's a gnat buzzing around his ear as he tells Dandy everything is fine, he knows Regina is lying, why doesn't he just have his mother come downstairs so that he can clear Dandy's name and get rid of Regina.

Off the bat, Regina's word is worth less than Dandy's simply because he is male, rich, and white. Obviously, it's BS, but I suppose the point of the crooked cop immediately shooting Regina is an attempt to tie the issue of racial privilege to the way the "freaks" are treated: Basically white, prosperous dudes rule all. Everyone else loses (housewives, freaks, people of color).

My problem is that these issues are all complex, and while they all come back to the subject of equality, it feels a little broad to act as if it's all one problem. Plus, I think we really understood Dandy's God-given power when he killed Regina's mom and no one came looking. Did we really need to kill Regina too, Ryan Murphy? I'm going to go with "nope."

More like this
UK Viewers Will Have To Wait To Watch The Handmaid’s Tale S5
By Maxine Harrison
15 Offensive AF Jokes In 'Friends' That Really Aren't OK
By Tolly Wright, Bustle Editors and Meguire Hennes
Helen Mirren Reacts To Queen Elizabeth II’s Death After Playing Her 15 Years Ago
By Grace Wehniainen and Radhika Menon
Kenan & Kel Just Reunited At The 2022 Emmys & Twitter Is Overjoyed
By Grace Wehniainen
Get Even More From Bustle — Sign Up For The Newsletter