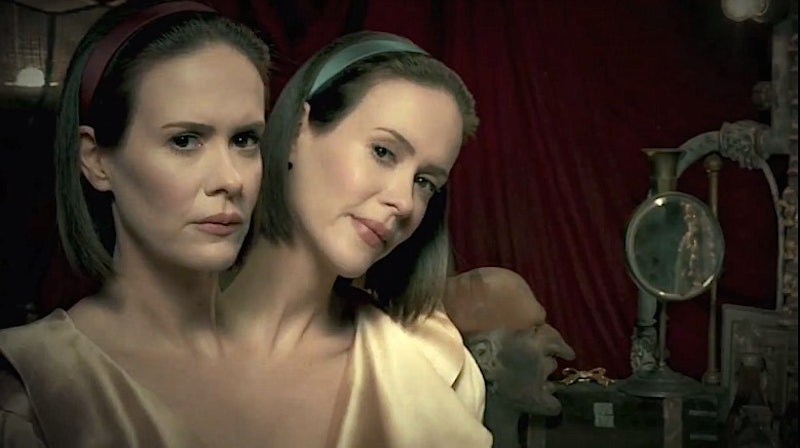 It's been an evening of twists and turns for American Horror Story: Freak Show. From Dandy's Bette and Dot puppet obsession to pool full of dead housewives, it's been quite the whirlwind affair. But I guess when you decide to name an episode "Tupperware Party Massacre," chances are you're going to come across a bit of bloodshed along the way. That said, it could be easy to overlook the calm, sentimental moment shared between Bette and Dot right before their totally-legit-and-not-at-all-sketchy surgery sponsored by Elsa and Stanley. Bette reveals that she's willing to die for Dot if the surgery is something her sister really wants. But instead of that motivating Dot to follow through with the procedure even more, it actually does the exact opposite, which goes to show you can never predict the character development of a Ryan Murphy show.

So now that surgery seems to officially be off the table (are we supposed to assume Stanley and Elsa just let them leave?!), Dot makes the decision to not only embrace who she is, but also how she's feeling, particularly about a certain drunk Lobster Boy who looks an awful lot like Evan Peters. Yes, Dot confesses her feelings to Jimmy, but despite her beautiful speech, Jimmy admits his heart belongs to someone else (aka Maggie).

It's probably for the best though, considering he just got arrested for the murder of all the housewives Dandy killed. So he's not going to be able to take part in any romance anytime soon. And, according to next week's promo, it looks like Bette, Dot, and Maggie are going to need to work together to save this handsome heartthrob, which is totally not going to be awkward or anything.

But a big part of me can't help but wonder if Dot will really be so quick as to accept defeat for Jimmy's love. Will she kill Maggie in order to have Jimmy all to herself? Will Bette do it for her since we know she's willing to go to extreme lengths to make her sister happy? Either option seems possible at this point and it would certainly lend an interesting twist to the twins' story arc. That is, unless Murphy plans on bringing surgery back into picture.