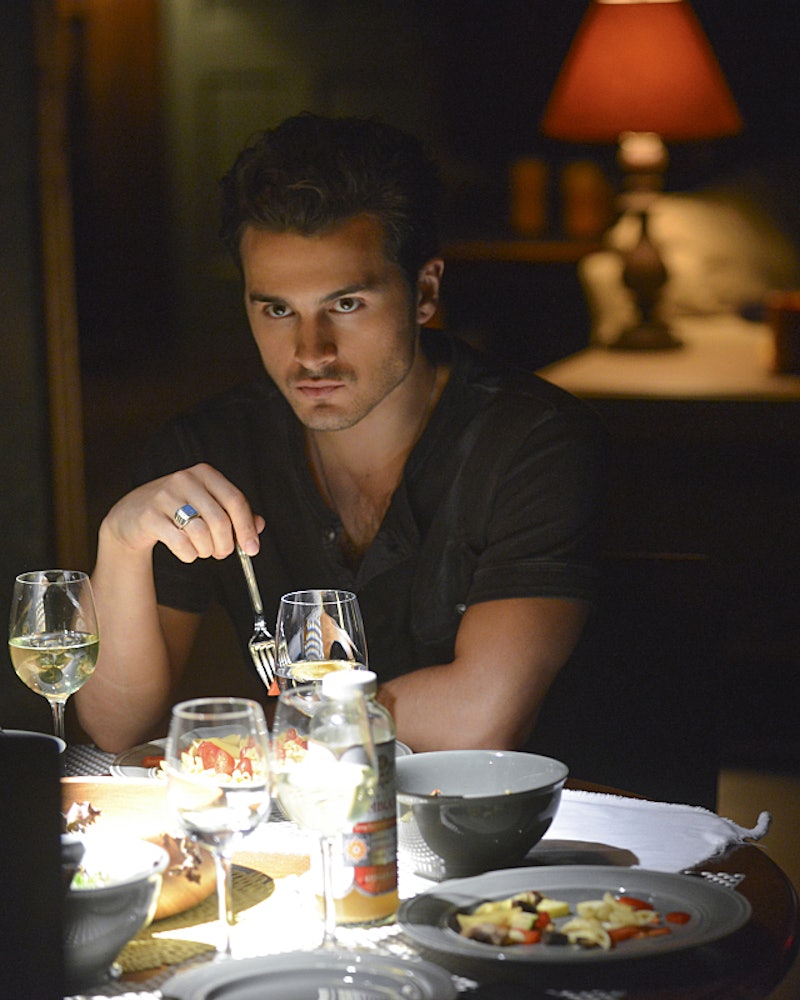 The way I see it, Enzo's story arc is about to face a game-changing crossroads — one that from which there is no return. This broody vamp has made it known for quite some time now that he intends on making Stefan's life absolutely miserable (because reasons!), and The Vampire Diaries ' midseason finale "Christmas Through Your Eyes" feels like the perfect opportunity for Enzo to start carrying out that promise. In the promo, we hear Enzo promise to "deplete every ounce of happiness from Stefan’s life," proving once more that British vampires are not to be trifled with. (Enzo, have you met the Mikaelsons?) But will Enzo's hatred of Stefan ruin his budding relationship with Caroline? Judging by what I think is about to go down during Thursday night's Christmas episode, I'd say it's highly possible.

You see, I'm predicting that Enzo will kill Caroline's mom, Sheriff Forbes, not because he has anything against Caroline, but rather because he knows that seeing her hurt will, in turn, hurt Stefan. Is the plan twisted and psychotic? Absolutely. But then again, so isn't Enzo. Chances are he hasn't really thought about the severe repercussions of this potential action. Perhaps he's even naive enough to think Caroline would forgive him for murdering her mother. (Spoiler alert: she totally wouldn't.) This would be a deal breaker for Caroline and Enzo's relationship, and I fear he's about to ruin it for good.

But what make me so sure Sheriff Forbes will be the one to face Enzo's wrath? There have been a few key hints pointing in her direction, starting with the fact that Marguerite MacIntyre, who plays Liz Forbes, is scheduled to appear in the episode to help bring "holiday cheer to Caroline at Whitmore College." Now Caroline's mom is not a main cast member and therefore only appears occasionally throughout the series and usually for a very specific purpose. That by itself isn't all that suspicious, I agree, but given that Paul Wesley recently told E! Online about an upcoming character death that will "break the people's hearts," I can't help but assume the worst about the timing of Liz's (not-so) coincidental visit.

And let's not forget that a key part of this week's TVD episode synopsis states that "Stefan is forced to break some devastating news to Caroline." What could be more devastating than discovering her mother is dead? And to make Stefan be the one to have to break the news to her — is it just me or does that have a very Enzo-like ring to it?

Then, of course, there's this image…

In the very brief glimpse we see of Stefan and Caroline hugging in the promo, he looks just as heartbroken as Caroline feels, not just for her, but for himself. (Remember, he was friends with Liz too, you know.) Ugh, I'm tearing up just thinking about all the ways this scene is going to completely wreck me.

So as much as I hate the thought of Liz dying, I can't help but realize that it's kind of been a long time coming and may actually be what brings the idea of Steroline back into the picture. I truly hope that I'm wrong about all this, but if I'm not, then good job, Enzo. Not only will this move wipe out one of the last remaining humans in Mystic Falls that is pro-vampire, but it'll also annihilate your chances at getting the girl. (*Slow clap*)