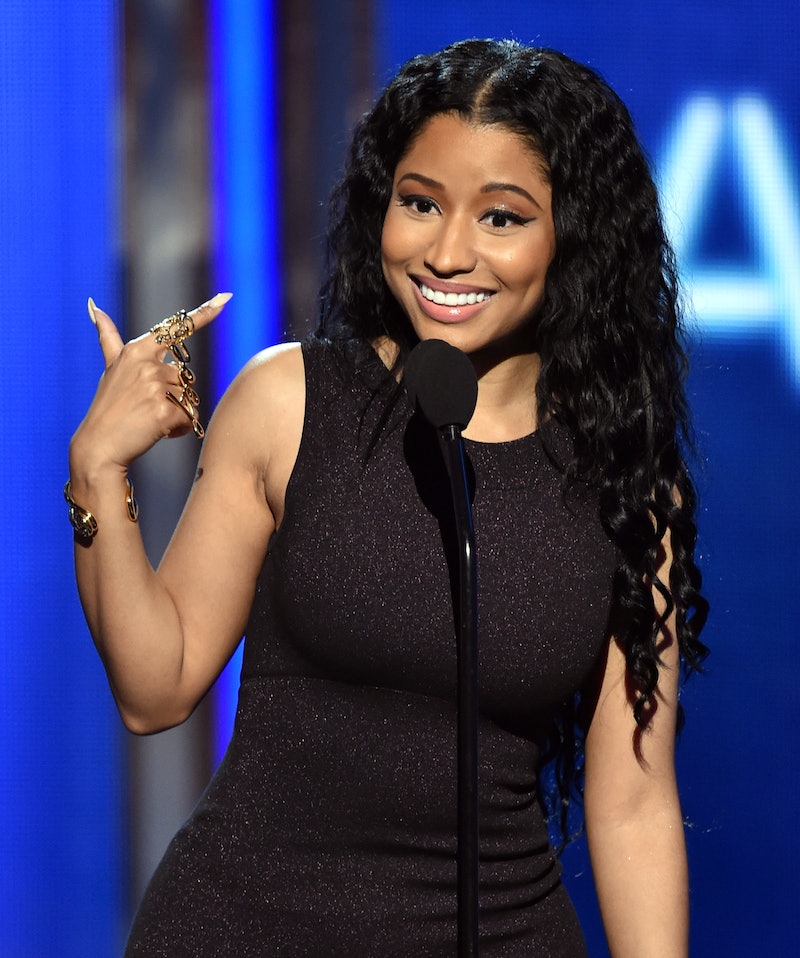 I don't know about you, but as soon as I heard that Beyoncé and Nicki Minaj had collaborated on "Feeling Myself," a song from Minaj's upcoming The Pinkprint album, I had already fallen to my knees to give due praise. The last time the two female artists had teamed up was for the "Flawless (Remix)" and I think we all remember exactly how awesome that turned out. The Pinkprint won't be released until December 15, but someone somewhere was even more impatient than the already impatient fans. As it turns out, "Feeling Myself" has leaked early and everyone is already going wild for the sultry, confidence-inducing track.

Beyoncé supplies the sexy, repetitive chorus that simply proclaims, "Feeling myself," in a commanding tone of voice that recalls images of such classic Bey lines as, "Bow down, bitches," and "fresher than you." It's like she's not just declaring how much she's feeling herself, but also somehow communicating that she doesn't care who else is in the room with her; others have absolutely no effect on her self-esteem. And, just in case you were confused as to who the absolute, indisputable queen of the world was, Beyoncé contributes a particular verse that just makes you want to flock to the Beyhive to praise her if you aren't already there:

Of course, Minaj is not to be outdone on her own song and her rap verses are the perfect compliment to Beyoncé's portions, featuring such memorable lines as, "Bitches ain't got punchlines or flow. I have both and an empire or so," and "stingin' with the Queen B and we be whippin' all that D 'cause we dope girls, we flawless, we the poster girls for all this." Ultimately, this song is a triumph for both Beyoncé and Minaj — and it's ironic that it should end with the line, "You like it don't you, snitches?" You know, considering the fact that some snitch somewhere has already leaked it onto the Internet. (Not that I'm complaining. Well, maybe I am a little.)

As a Minaj and Beyoncé fan, I'm already urging people not to go looking for the song itself as it's definitely worth the mere four day wait to listen to (and loyal Bey fans and Barbies are already surging into action to get the song taken down from every site it's found on). However, even if you can't listen to it now rather than later, at least the promise of these epic lyrics within this epic song from two epic women who have absolutely been crushing the game (and all the competition) this year should be enough to hold on to.

"Feeling Myself" is the perfect marriage between Minaj's sound and Beyoncé's, blended to perfect effect, and as far as I'm concerned it's already a guaranteed hit. The music video for this song is going to be the best thing any of us have seen in a while. And it's already gone over well with the fans who were up early enough to catch the leak before it was taken down, just in case you need some extra encouragement to pre-order The Pinkprint so you're first in line to hear this track when it is officially released.

More like this
Beyoncé’s Special Tribute To Sister Solange Was Both Touching & Hilarious
By Stephanie Topacio Long
At 28, Melanie C Was Falling In Love & Reclaiming Her Confidence
By Olivia-Anne Cleary
Dan Levy Appears In The Latest Teaser For The Weeknd's HBO Series, 'The Idol'
By Jake Viswanath
Everything To Know About Taylor Swift’s 10th Studio Album, 'Midnights'
By Grace Wehniainen and Jake Viswanath
Get Even More From Bustle — Sign Up For The Newsletter