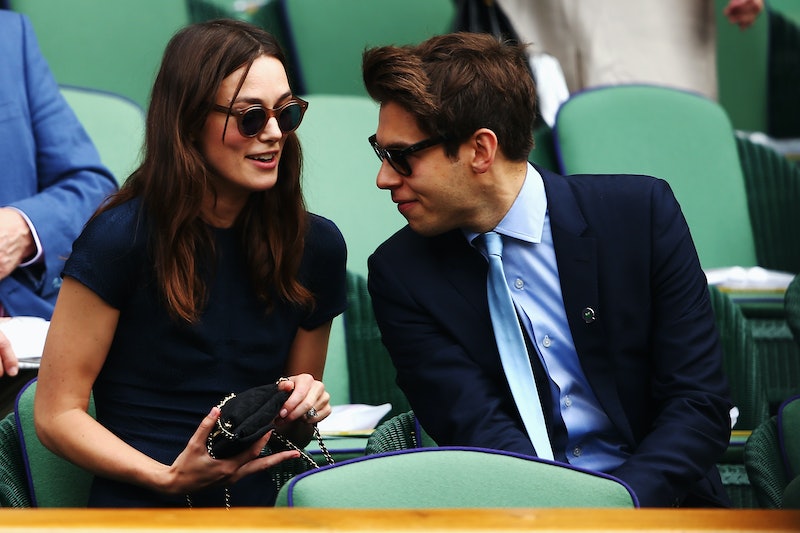 Update: According to her rep, Keira Knightley is pregnant. Knightley's rep confirmed her pregnancy with Elle UK who reports, "We just got off the phone with her rep, who happily admitted the rumours were true, but also said that Keira will not be making any further comment." Congrats, to Keira and husband James Righton!

Update: Us Weekly has now reported the news as well and says that it has been confirmed by "multiple sources." There is still no confirmation from Knightley.

It's hard to be a female celebrity in Hollywood. Not just for all of the usual reasons, but because if you wear baggy clothes, gain some weight, or — God forbid — forgo wine at any event, suddenly everyone will think that you've got a bun in the oven. I mean, if you go anywhere with anyone at any time, that's enough for people to think you're dating (see the strange case of Taylor Swift and Karlie Kloss), but the pregnancy label can haunt female celebrities at many points in their career before they ever actually get pregnant. That's why I'm taking Page Six's report that Keira Knightley is expecting her first child with a grain of salt until Knightley confirms it herself. I mean, I'm already happy for her, but I don't want to be prematurely happy for her.

According to Page Six, Knightley has been fueling these rumors of having a bun in the oven by having the audacity to go to the Moët British Independent Spirit Awards over the weekend and not touch a single drop of Moët while she was there. She's also been wearing more loosely fitting clothes — the second sign. All we need now is for her to start gaining even a little bit of weight and that's the final nail in her coffin as far as public perception is concerned.

If Knightley is pregnant, it will be her first child ever, as well as her first child with husband James Righton. Righton is an English musician, and he and Knightley were married in 2013, spending an entire year together in happily wedded bliss before this possibility of starting a family cropped up. The former Pirates of the Caribbean actress is a fairly private person, so it might be a while — if at all — that we get any more information than what rumors can provide, but she's certainly at a great place in her life to be having children. She seems happy, her career continues to thrive, and she's in a loving relationship that we're all rooting for.

All I really need at this point is for Knightley to turn out to be pregnant and have a girl — then name her Elizabeth. Or am I the only one who refuses to let the original Pirates of the Caribbean movie go? (Sequels? What sequels? There were no sequels, and there is especially no fifth Pirates of the Caribbean movie coming out, you crazy.) Knightley has expressed her interest in motherhood in the past, but fans need not worry. Apparently, she has no intention of stepping away from her career when she does finally have children of her own, so we'll still get to see her familiar face and amazing accent on our screens for years to come.