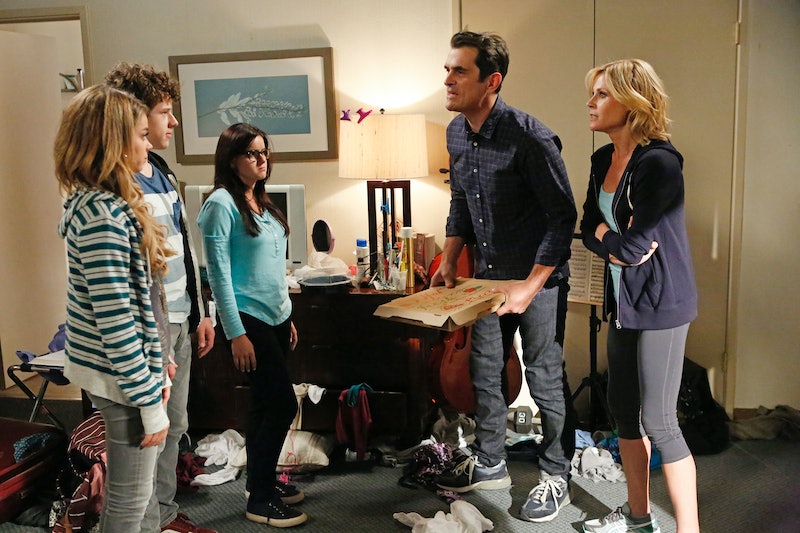 Up to this point, it has seemed that Modern Family's presence in every Best Comedy award category would survive anything — apocalypse, nuclear war, a slew of promising new TV comedies. But, when the 2015 Golden Globe nominees were announced on Thursday morning, TV fans realized something was missing in the Best Comedy category. There were quality old standbys Girls and Orange Is the New Black. There was beloved dark horses Silicon Valley and Transparent. And then there was Jane the Virgin, the CW underdog whose fan base is burgeoning alongside its potential. But one show that was shockingly nowhere to be found? That's right — Modern Family, the ABC comedy series that has scored a Golden Globe nomination (and one win) every single year since its creation in 2009.

And, strangely enough, despite the fact that the series is still pulls in strong ratings, this news is delighting TV fans across the country. Though Modern Family is no doubt popular, critics and viewers alike have criticized the show for become formulaic, straying far away from the breath of fresh air it was upon its creation. But awards programs hardly agreed with the criticisms over the years. After all, Modern Family has not only been nominated for an Emmy every year since 2010, but it's won the Emmy every year since 2010.

Of course, the Twitter user above might not necessarily be correct in his prediction. After all, though the Golden Globes have nominated Modern Family every year since it first hit the airwaves, the awards show has also tipped its hat to some of the more interesting shows rising the critical ranks on television. Look not only at the nominations this year for Silicon Valley, Transparent, and Jane the Virgin — three series that can hardly be considered hits for HBO, Amazon, and the CW, respectively — but also at the winners from the previous two years: last year's shock Brooklyn Nine-Nine and 2013's victor Girls. As TIME's James Poniewozik put it:

Still, the Golden Globes' choice this year lends a sense of unpredictability to the upcoming awards, airing on Jan. 11, already considered a must-see event, thanks to hosts Tina Fey and (the snubbed) Amy Poehler. Who will win the Golden Globe for Best Comedy Series? It's anyone's guess, but, for once, we can safely say Modern Family won't.

More like this
24 Years Ago, 'Friends' Dropped Its Most Underrated Ross & Rachel Episode
By Grace Wehniainen
Netflix Reveals First Look At Wednesday In The 'Addams Family' Spinoff Series
By Bustle Editors
20 Photos Of The 'Hocus Pocus' Cast Then & Now
By Radhika Menon
What Does Nancy Jo Sales Think Of 'The Real Bling Ring'?
By The Editors
Get Even More From Bustle — Sign Up For The Newsletter