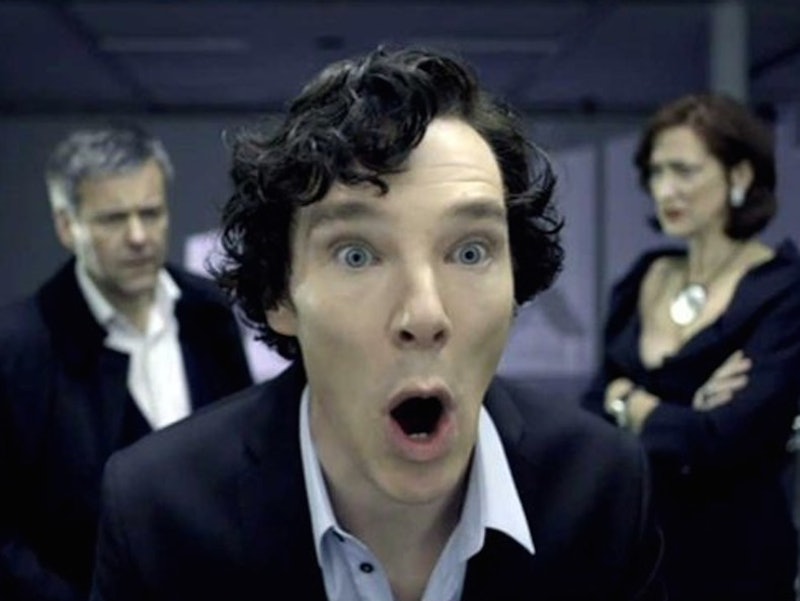 The Golden Globes recognized some truly amazing actors, films, movies, etc during this year's round of nominees. I think we were all expecting Benedict Cumberbatch to be nominated for a Golden Globe in at least one category, but was anyone expecting it to only be for The Imitation Game? Admittedly, Sherlock has only been nominated for one Golden Globe in the show's history — and it was an award they didn't even win — but it seems particularly jarring that Cumberbatch didn't get praised for a Sherlock Season 3 in which he perfectly portrayed the eponymous detective dealing with (spoiler alert) his best friend's soon-to-be-wife and the revelation that she has a past as dark and bloody as any of the criminals he hunts.

Don't get me wrong. I'm thrilled that Cumberbatch got a Golden Globe nom because he totally deserves it. I'm just expressing my surprise that Sherlock didn't get a Golden Globe nom as well. In fact, I think my mild surprise is probably a better reaction than Sherlock Holmes himself would have if he were watching the Golden Globe nominations on Thursday. As we all know from watching the show, the detective is nothing if not prideful and eager to have his talents recognized by the masses. Would he be happy for Cumberbatch, even if Cumberbatch wasn't getting a nod for portraying him? Let's find out.

John Tried to Warn Him Not to Expect a Nomination

But Sherlock Invited Everyone to Baker Street Anyway

Poor Greg Lestrade had other things he could have been doing on a Thursday morning than hanging out with a man who faked his own death and can't even remember Lestrade's first name, okay?

Sherlock Set Up a Google Alert For Himself

But forgot he still hadn't changed his ringtone back from when Irene Adler had put her hands on it.

Finally, It Was Time for the Announcements

But, Somehow, Sherlock Didn't Get Any

In the Awkward Silence, He Kicked Everyone Out

Except John and Mary, of course, because they both refused to leave and are both better equipped at dealing with Sherlock and his moods than anyone else. Except Mrs. Hudson. But she went off to make tea.

Sherlock Had an Idea for How to Correct This Mistake

But, for some reason, John wouldn't go for it. Which is probably for the best, all things considered.

He Fell Into a Very Manly Pout

And Just Let the Internet Speak For Him

More like this
Lego Just Announced Its 'Black Panther' Set Release Date
By Maxine Harrison
Margot Robbie Breaks Her Silence On *That* Viral 'Barbie' Moment
By Maxine Harrison
Nicola Coughlan Shared A Lady Whistledown Excerpt From ‘Bridgerton’ Season 3
By Grace Wehniainen, Alyssa Lapid and Sam Ramsden
Everything To Know About 'The Last Of Us' TV Adaptation
By Sophie McEvoy and Radhika Menon
Get Even More From Bustle — Sign Up For The Newsletter