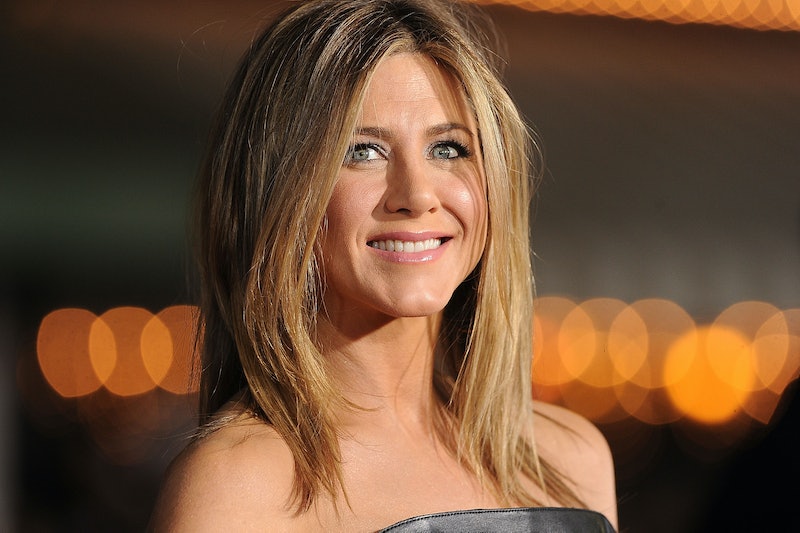 It has been over a decade since Jennifer Aniston was nominated for a Golden Globe, but her luck changed this year with a Best Actress nod for the upcoming drama Cake . This film also snagged her a SAG Awards nomination earlier this week, marking the first time she's been an award season contender since her days on Friends. (Aside from an Emmy nomination in 2009 for guest-starring on 30 Rock, she hasn't been up for a major statue since 2003.)

What makes Cake so pivotal for Aniston's career is how much she transformed herself for the emotional role. She went without makeup in the gritty film — which she called "liberating" and "empowering" — and her performance is equally stripped down and raw. The movie centers around Claire (Aniston) as she becomes fascinated with the suicide of a woman in her chronic pain group and copes with her own personal tragedy.

With the prospect of a Golden Globe and a SAG Award, plus the Oscar buzz surrounding her in Cake, we have to celebrate. There's one more person who wants to react to the exciting news, and that's Rachel Green. Here's how Aniston's Friends character would feel about the nominations, as expressed in timeless GIFs.

OK... while running to tell her friends immediately.

Stage 2: Freak Out With All of Your Friends

This probably happened with Aniston and her best friend Courteney Cox in real life.

Stage 5: Screaming and Telling Everyone

It's been 11 years since her last Golden Globe, people.

A bottle of wine for everyone.

"Shake It Off" would be more appropriate than "Baby Got Back," unless you count the "Anaconda" sample.

Will she win while up against the likes of Reese Witherspoon and Julianne Moore? Who knows. But it's the nomination that counts.

More like this
24 Years Ago, 'Friends' Dropped Its Most Underrated Ross & Rachel Episode
By Grace Wehniainen
Lindsay Lohan & Jonathan Bennett Celebrated Mean Girls Day Very Differently
By Jake Viswanath
Margot Robbie Breaks Her Silence On *That* Viral 'Barbie' Moment
By Maxine Harrison
A New Scooby-Doo Movie Confirmed Velma Is Gay & Twitter Is Pumped
By Radhika Menon
Get Even More From Bustle — Sign Up For The Newsletter