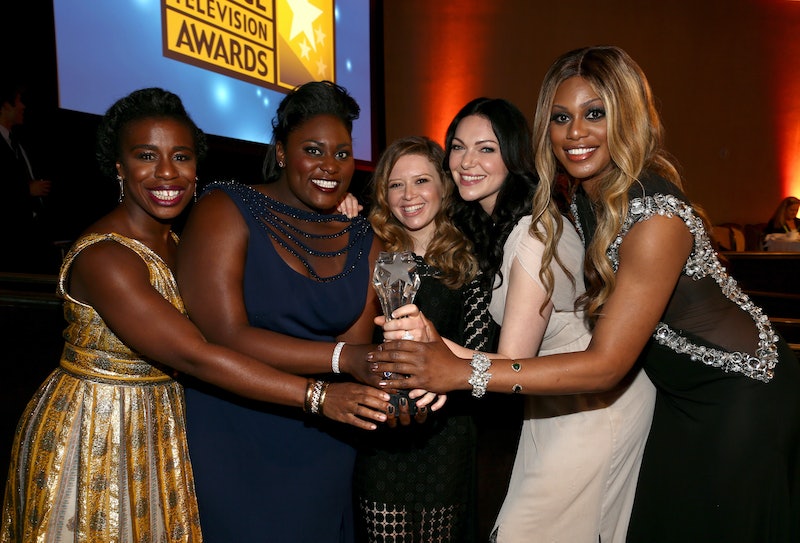 Okay, so yesterday I was a little peeved when my personal favorite film of the year, Interstellar, was snubbed by the SAG Awards. (And now, the Golden Globes? How dare they!) Thursday morning, the 2015 Golden Globe nominees were announced, and like the SAG nominations, had both surprises and well, not-so-surprises. Unsurprisingly, Orange Is The New Black totally killed it. Netflix is really having the best year in television because both House of Cards and Orange Is the New Black scored three nominations each, just behind Fargo and True Detective. Along with a nod for Best TV Series, Musical or Comedy, two of the show's darlings, Uzo Aduba and Taylor Shilling, each scored individual nominations for Best Supporting Actress and Best Actress in a TV Series, respectively.

While this is an incredible honor for this amazing show and these amazing actresses, I couldn't help but think about the other fellow members of the cast that have been repeatedly snubbed, because I am a little brat and want to see ALL of my favorites win. I know awards don't mean everything (blah, blah, blah), but, of course, it's an honor to be recognized for the hard work you put into a character, and we know that the ladies on OITNB are characters. So, since Aduba, Schilling, Natasha Lyonne and Kate Mulgrew have gotten the noms they deserve, I wanted to shine a little light on the other girls at Litchfield that have made this show as successful as it has been and definitely need a nomination for themselves one day.

Taystee is probably one of my favorite characters on the show, and, despite some of the emotional ups and downs she went through with her backstory with Vee, she remained hilarious, intelligent and very self-sufficient. In Season 2, Taystee's backstory delved into her turbulent past with Vee and showed us the motivations behind her willingness to fall back into her spell. However, we also saw her pull through and become the woman she has been striving to be.

I don't think you can be a fan of Taystee without completely falling in love with Poussey. Samira Wiley studied at Julliard School in New York, and, after she heard through the grapevine that fellow Julliard alumna Brooks got a role on this show, they read lines together and she eventually got the part of Poussey. I guess they're the best of friends in real life, and that is perfect! After Season 2, Poussey showed herself to be the most moral and brave inmate at Litchfield — for taking a stand against Vee and staying strong in her friendship with Taystee.

Taryn Manning truly is a chameleon. It took me a long time to believe that this was the same actress that was Britney Spears' best friend in everyone's guilty pleasure film, Crossroads. But, somehow, Manning transforms herself into the the villainous Pennsatucky, who is out to make Chapman's life at Litchfield a nightmare. Who knew such a religious character could be so terrifying? Actually, don't answer that.

I think Yael Stone as Lorna Morello might be the most under appreciated character on OITNB because her story has evolved so much in this past season. Stone manages to keep Morello a woman that we care so much for, despite her, um, craziness. The truth behind her backstory with Christopher added many dimensions to Morello, notably as a delusional yet charming woman trapped in childish dreamworld, and Stone handled them with ease. Also, please remember that her amazing accent is actually done by an Australian actress — KUDOS.

When we meet Gloria Mendoza, she isn't the warmest character, but she establishes herself as a stern motherly presence for many of the girls at Litchfield, particularly that Latina cast. She steps up to provide support to Daya when she discovers she is pregnant and her mother, Aleida, does not show any interest. When Mendoza's backstory of abuse comes to light, Leyva brings together all of the facets of why she is how she is and shows her strength in overcoming. Leyva is also leading a pack of many major Latina characters on a successful series, which is an inspiring step for woman of color on screen.