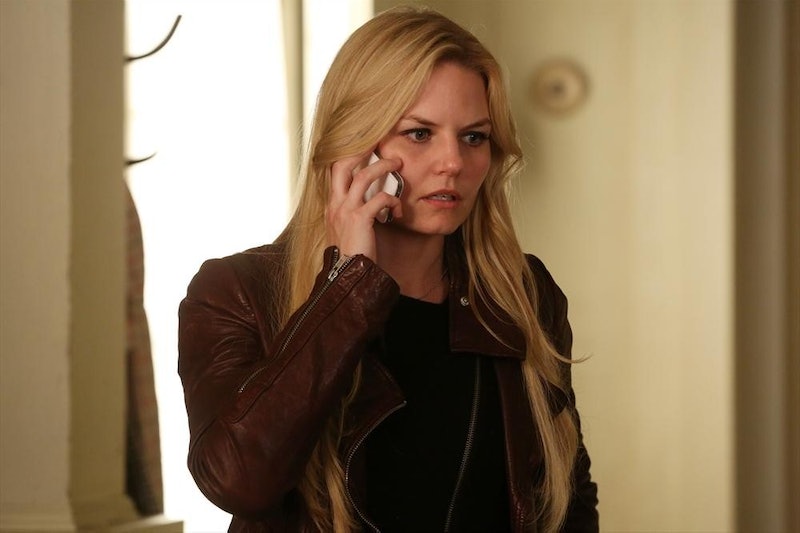 The saddest part about winter (other than the horrifying cold) is that everyone's favorite shows go on hiatus. Unfortunately, things are no different for Once Upon a Time whose winter finale premieres Sunday. Not only will fans be bidding farewell to their regular Sunday night routine, but it'll mean that the Frozen arc is really, truly over. As depressing as that is, there is one good thing to look forward to: the arrivals of three new villains just in time for the second half of Once Upon a Time's fifth season. In the winter finale, titled "Heroes and Villains," we'll get a look at the new foes Emma and Storybrooke must fend off now that the Snow Queen is no longer a threat.

But who wants to wait until Sunday to see what they look like, and until the spring to see their story lines play out? Not me. This is America and I demand everything now. Fortunately Entertainment Weekly has pictures of the new villains all dolled up and ready to destroy whatever comes their way. As the Frozen story line concludes, three classic Disney characters will step in: Maleficent, Cruella De Vil, and Ursula. So what can we expect from these dangerous, dynamic characters? Show creators Adam Horowitz and Edward Kitsis spilled to EW about what's in store for Storybrooke's newest inhabitants

In this world, Cruella isn't just evil, she also possesses magic. (It's too bad she didn't have that in the animated movie, because then she wouldn't have had to send those two bumbling idiots to steal the puppies.) Kitsis sums her up saying, "She’s part villain, part Zelda Fitzgerald. There’s something glamorous and jazz age, but something very deadly about her as well." Sign me up, because I can't wait to see what OUAT does with Victoria Smurfit's character.

Merrin Dungey's character hopefully means the reappearance of Ariel, but it also means getting an origin story for a villain often overlooked. Horowitz says they plan to "explore a backstory of who she is and what Ursula is all about." As Kitsis reminds fans, "evil is not born, it’s made," and now we get to find out what made Ursula evil.

We've seen this character before; she was one of Regina's "friends" back in the Enchanted Forest. That is, until Regina stole her curse and made her an enemy. Now that the show has had a few seasons to think on her character, Horowitz says they're bringing her back anew. "Everyone — the writers and costume designers — have had more time to really develop the character on a character level, a visual level and special effects level," he said. Since the release of Angelina Jolie's movie about the character, the writers said they might have nods to the film. But still, this character will have her own unique OUAT twists that fans always love so much.

As a bonus, Horowitz and Kitsis say we get to see these new ladies work together in the name of evil which opens up some comedic moments. "These strong women with slightly aligned agendas, but wanting things for themselves, and watching the sparks fly between them," Horowitz revealed.

I don't want the first half of season four to end, but I also can't wait to see these villains and their story lines unfold in the second half of the season. So if the creators have achieved anything, it's that they've made fans even more excited for Season 4: Part 2, and I'm sure we'll all be on the edge of our seats until spring.