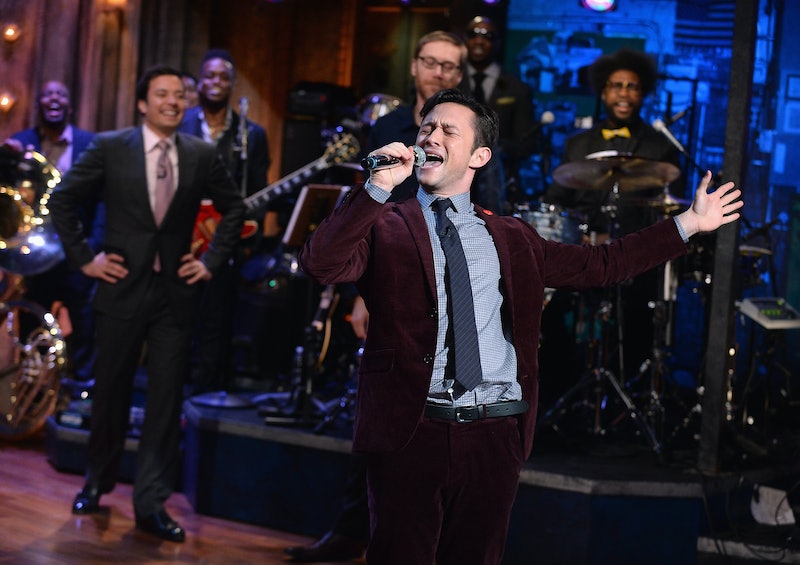 There's no one who melts hearts like Joseph Gordon-Levitt. The talented actor knows how to turn on the charm both on and off screen, and one of his signature ways is through song and dance. From lip-sync battles with Jimmy Fallon to sold-out hitRECord show performances where he sings R. Kelly's "Ignition," JGL understands what the people want, and boy does he deliver. Through the years, he's performed solo — like singing "Twist and Shout" on the radio or karaoking in (500) Days of Summer — and also with friends, like Zooey Deschanel or Lady Gaga and a bunch of adorable Muppets. But no matter whom he's with or what he's singing, he's incredible.

Although we won't see JGL in a musical movie anytime soon — at least not that I know of, and I have a strong radar for these things — there's no reason not to celebrate his fantastic pipes. With HitRecord on TV coming back for Season 2 in 2015, there's sure to be more memorable moments, but for now, let's just rank 25 of his past performances, shall we? And while we're at it, I'll say that he would have been the perfect match for Anna Kendrick in The Last 5 Years . Sorry, Jeremy Jordan.

This soft acoustic is fantastic, but it's nothing compared to some of the other times he's sang.

This clip also features his take on "La Bamba." Both are fun, but not quite as sexy as his rockstar voice.

This is Gordon-Levitt's raspy rock at its finest.

This classic rock song is also incredible. It's hard to rank all of these, because they're all basically No. 1.

A little country never hurt anyone in general.

And JGL being a feminist makes this even better.

19. "American Scrimp n Save" With Sia

If you love this original song as much as I do, you can buy it on Amazon.

I would do anything to karaoke with JGL, or even just Tom from the movie.

16. "I Don't Wanna Live on the Moon" from Sesame Street

Can he play one of the Beatles in a biopic, please?

Even in a blood-soaked white suit, he is sexy.

His deep voice on this song is a lot different than baby Michael Jackson's.

This is an original song that JGL performs in a recording booth. It's a lot to handle.

10. "Nothing Big" With Tasha Taylor

"Nothing naked... not yet" is an original song lyric. Ahem.

9. "Midnight Radio" From Hedwig and the Angry Inch

So, he's the next Hedwig on Broadway, right? It has to happen.

Second-best to singing with Gaga. Speaking of...

Don't have to ask me twice.

His French singing trumps all.

In French and with Hathaway? Whoa.

3. "What Are You Doing New Year's Eve" With Zooey Deschanel

I know this doesn't really qualify, but JGL's rendition of "Superbass" is amazing, even if it's technically just lip-synced.

More like this
An Extremely Messy Ranking Of What Actually Happens In 'Don't Worry Darling'
By Chloe Foussianes
Rita Ora Celebrates Finding Her "Fairytale" Ending With Taika Waititi
By Sophie McEvoy and Catharina Cheung
The 50 Most Powerful Characters In The Marvel Universe, Ranked
By Johnny Brayson and Nola Pfau
Everything You Need To Know About ‘Black Panther: Wakanda Forever’
By Bustle Editors
Get Even More From Bustle — Sign Up For The Newsletter