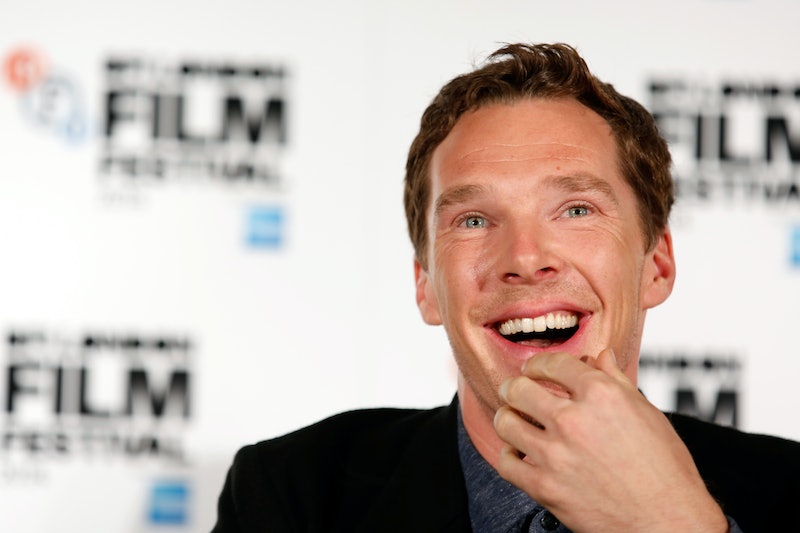 It wouldn't be a normal day/week/month/year without talking about this handsome man with an accent capable of making anyone swoon. With that said, gather 'round all you fans of the award-winning Sherlock star and Golden Globe nominated Imitation Game actor. That's right, it's time, once again, to talk about the magnificent man known to all as Benedict Cumberbatch. It's no secret that Benedict Cumberbatch has a way with words, which is yet again proven through a recent chat with Variety. Cumberbatch talked with the publication about a variety (get it?) of things, and let me tell you, if you didn't already loves this man as is, then you're going to adore him even more for this interview.

Cumberbatch candidly chatted about his work, his fame, his family, his traditions, and, of course, photobombing. As easily as I could write a long-winded piece dissecting Cumberbatch's conversation skills, it seems fitting to list off some of his most memorable quotes from this interview and this interview only.

With that said, sit back, relax, and take time to reach each of these nine quotes from this man who is, and will always be, a legend in the entertainment world and among his fans.

“The more work you do, the more publicity you have to do. That’s the only time I get worried — the idea that people might get sick of me not because of what I’m doing as an actor, but because of the proliferation of me in the media.”

No, we will never get sick of you. Not possible.

“I literally won in my sleep. [Matthew McConaughey and Woody Harrelson] announced my name and just wandered off. Probably smelted the statue into a bong by now.”

His words on winning the Emmy Award for his performance in Sherlock shows you his brilliant sense of humor.

“I was on a general meeting at Warner Bros., and didn’t know who was sitting on it when I mentioned my interest. I found out Leo [DiCaprio] was on it, and thought, ‘Well, I’ve wasted a trip.’”

Even he recognizes DiCaprio for his amazing talent.

“Alan Turing is a war hero, a gay icon, a man whose work ripples on into our lives now. He forged a life so brief and tragic, yet so profoundly important, it shaped the world. And then he was thrown away by the very society he helped keep safe. Awarded with persecution and prosecution for being different.”

The love and respect he has for his Imitation Game character is beautiful.

“The biggest compliment I got was when his [Turing] family came to the London premiere, and said (that watching the movie) felt like being with him again. That’s the only review I need.”

“That’s how I would have done it if I wasn’t in the position I’m in. So that’s again me trying to normalize things.”

Here's why Cumberbatch announced his engagement to Sophie Hunter the old-fashioned way. Can you blame him?

“They wanted me to be anything but. They afforded me a ridiculous education and all of their love; it was utterly selfless and self-sacrificing.”

Yep, he adores his family, and we adore him for it.

“The amount of people I get asking me, ‘Omigod, can you photobomb me?’ No. I’m not a performing monkey. When it gets really banal and reductive, I’m like, let’s move on.”

Imagine him saying this in his best "Valley Girl accent," which is what Variety said he did. Anyone have a recording?

“If I go back and I’m tired on set or not enjoying the moment I’ve been given to play that character onscreen. I’ll never forgive myself.”

He takes his craft and roles seriously, and Cumberbatch never wants publicity (especially the time he's taking to promote Richard III) to distract him from his work. Talk about one respectful actor.