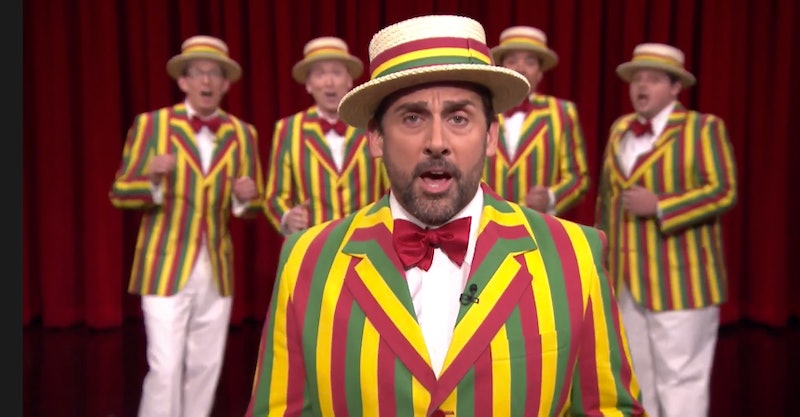 Foxcatcher sees Steve Carell make a rather extreme-looking physical transformation into John Du Pont. The late night comedy circuit, however, sees him take on something much more familiar — his usual comedic self doing hijinks on The Tonight Show. Carell singing "Sexual Healing" with Jimmy Fallon and three other ridiculously-dressed men is much less stressful than watching him play a murderer.

Fallon brought back his barbershop quartet the Ragtime Gals (spoiler alert: there are no gals) on The Tonight Show Wednesday, adding a fifth in Carell. They played it in classic comedy mode, using the assumptive wholesome vibe around barbershop music as a contrast with the lyrics of "Sexual Healing."

It's not quite as fun or interesting as watching Benedict Cumberbatch read R. Kelly lyrics, or quite as wonderfully awkward as Maeby and Michael Bluth singing "Afternoon Delight" on Arrested Development, but it's still a fun two and a half minutes. If anything, it's an excuse to put Fallon, Carell, and the rest in those outfits for a little while.

Check out the video for yourself below, and rate their vocal performances as they try to make lyrics like "open up and let me in" sound less (or is it more...) gross while looking very loud.