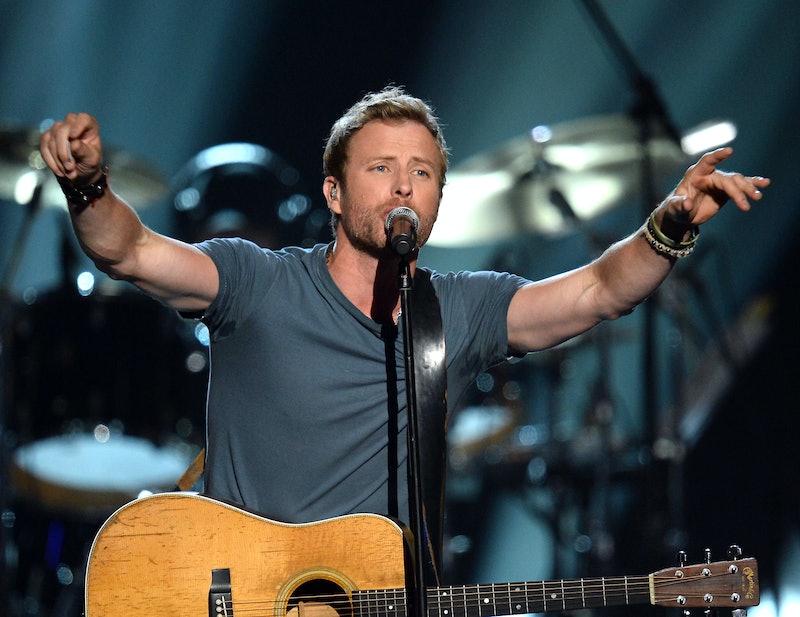 I might sound like a broken record when I say again that country music beyond Nashville isn't much of my thing, but as I discovered with Dan + Shay, it doesn't hurt as a music fan to try some new things every once in a while. I'm not saying I'm totally shallow, but a cute cover on a country book will certainly grab my attention a little if you catch my drift. When country singer Dierks Bentley came to my attention, my first thought was "Who is this Bradley Cooper/Chris Martin hybrid because I want to get to know him." Yes, exactly like that. Naturally, I acted as any self-respecting single young woman armed with Google would, and I asked the all-important question: Is Dierks Bentley single? Are my dreams of being a Rayna Jaymes to someone's Luke Wheeler just within my grasp? Well, sadly for many of us, the answer is a definite NOT SINGLE.

So who is the woman who snagged one of country musics most handsome and dreamy stars? I didn't have to dig too much because Bentley is very open about sharing his support of his wife since 2005, Cassidy Black. At first, I thought she'd definitely be a country star herself (doesn't that sound like a country singer's name?) but turns out she's just a normal girl who fell in love with a rock star.

Seems like Bentley and Black have been a part of each other's lives since they were younger and living in Phoenix, Ariz., and they had a pretty cute beginning if you ask me. They met when they were in eighth grade, and finally got together after they each dated each other's best friends (whoops) and decided they were a better match. Hey, it's high school, weird things happen.

Bentley told People magazine, "I had a crush on her the whole time, but I wasn't cool enough. I was way too immature and into drinking beer and guns and blowing things up." Sounds like a high school age guy to me. Soon after, they began an on-and-off relationship that went on while she lived in San Francisco and he moved to Nashville to pursue his music dreams.

Things changed on a fateful day in 2005, she visited him on tour in Las Vegas and, as Bentley explained, "When she walked on the bus, I just knew." Oh man, how is that for ROMANTIC. Anyway, their super romantic life didn't end there, it actually began with a bang when he took his love to Mexico to elope, the day after he proposed! Where can I find one of these for myself?

Anyway, since 2005, they've been happily married and have three children, Knox, Evie, and Jordan. The couple remains well-rounded and supportive, and when Black ran in the Boston Marathon this year, he shared an adorable photo of their family on his Twitter for all his fans to see. Well, if that doesn't answer your question, I don't know what will.