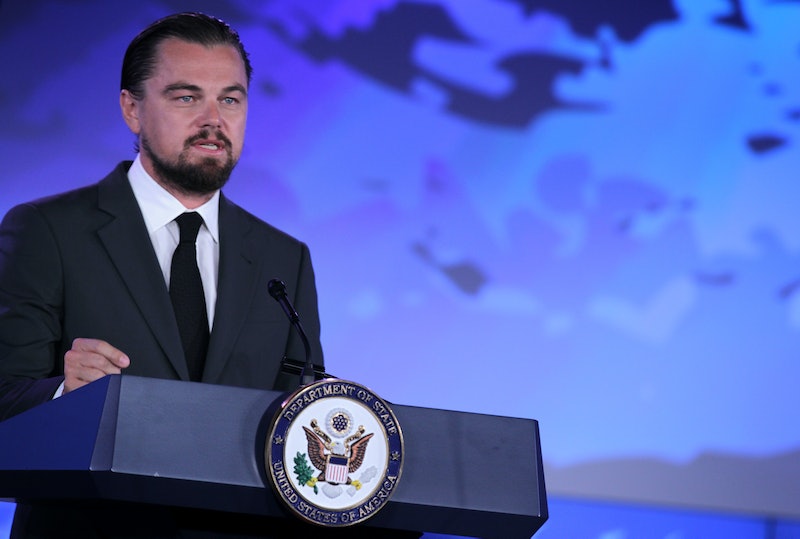 After that crazy rumor about how Leonardo DiCaprio left a nightclub in Miami with a total of 20 women, I can't say I'm too surprised by this news. Though it's still not confirmed whether or not that rumor was true — I mean, 20 women, that's a lot! — he is in Miami for the annual Art Basel show, so it's highly possible that he left with a number of women less than 20, or something like that. Then again, this is Leo we're talking about, so maybe he really did leave with 20 women. Anyway, that's beside the point: The fact is that the rumor exists, therefore, I'm not surprised by this new report from Us Weekly stating that Leonardo DiCaprio and his girlfriend Toni Garrn have split, after dating for over a year.

Rumors of their relationship being on the rocks have been surfacing recently ( People stated that the two were out together last week, but they didn't appear to be paying each other much attention), so I suppose this unfortunate news of their split was only a matter of time. And, after that rumor stating he'd left a club with 20 women? I'm surprised the news didn't come out then.

DiCaprio and Garrn, who is a Victoria's Secret model, were dating since May 2013, and no reason was reported for their sad split.

More like this
Who Is Nick Cannon Dating & How Many Kids Does He Have?
By Jordyn Tilchen and Radhika Menon
The 'Love Island' Wedding Mystery That No One Saw Coming
By Darshita Goyal
Kevin Kreider Finally Asked Out Kim Lee On 'Bling Empire'
By Brad Witter
George From 'Married At First Sight' Remains On Screen After His Arrest
By Darshita Goyal
Get Even More From Bustle — Sign Up For The Newsletter