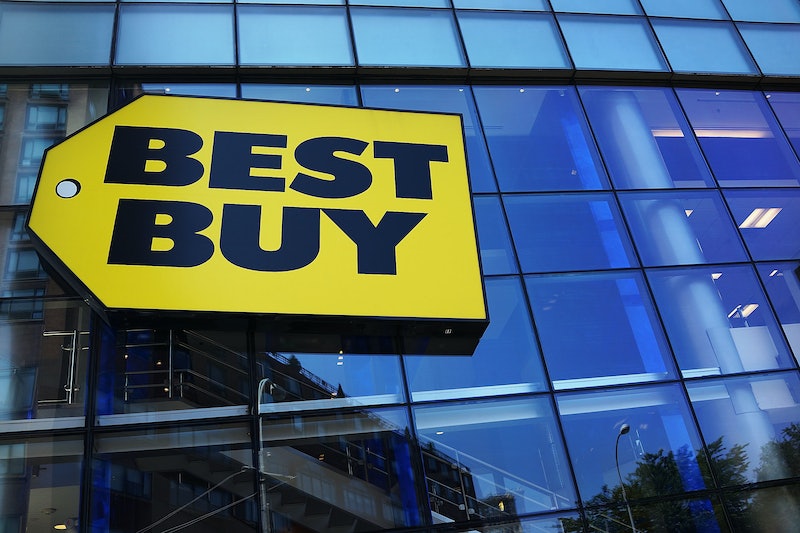 Earlier today on Twitter, Best Buy pulled a Really Not Cool Or Even Mildly Appropriate PR move when the company brazenly tweeted, “We have everything you need. Unless you need a payphone. #Serial.” Either they've forgotten that Serial s about an actual teenage girl's murder or the cultural obsession with the podcast has dehumanized the event itself to the point where the temptation to capitalize on it trumps the necessity of demonstrating a degree of sensitivity when dealing with the death of a teen girl. For all you non-Serialists, if you haven’t listened and are very confused right now, here’s a super quick synopsis: The key witness, Jay, supposedly saw Hae Min Lee's convicted killer Adnan Syed use a pay phone at a Best Buy location to call him for a ride after allegedly murdering Hae Min Lee in the parking lot. But according to other people familiar with that store in 1999, that part of the story is problematic because there might have not even been a pay phone for Adnan to use, thus discrediting Jay’s story, so this has been kind of been a big deal. Thus, the tweet.

In fact, Serial fans hyper-invested in the story have actually trekked to the Maryland Best Buy location to look for any evidence of a pay phone. While nothing conclusive has been found, a man named Robert Hunt found remnants of a platform that might have been part of the alleged pay phone. Either way, it’s clear that Best Buy (who apparently hasn’t appreciated the plentiful company references in the broadcast) took it upon themselves to use this clue as more company advertising. Which would be OK (and even clever!) if Serial was a fictional murder mystery—but it’s so very not. It’s a real case about a real murder of a real girl who was brutally killed in the alleged Best Buy parking lot.

Shortly after, Best Buy probably had a "Oh, that was not the best it, was it? People will probably not like us for this!" epiphany, and deleted it. Here's their apology:

However, it was far too late. Thousands already saw the offending quip. Here are some of the outraged responses:

More like this
After The Bling Ring, Nick Prugo Was Embroiled In Another Scandal
By Arya Roshanian
Why TikTok Is Flooded With Controversial Videos About "Pick Me Girls"
By Courtney Young
Here's How To Get Your iPhone To Update Automatically Forever
By Emma Carey
Why Everyone Is "Soft Tagging" Friends On Instagram Right Now
By Alexis Morillo
Get Even More From Bustle — Sign Up For The Newsletter