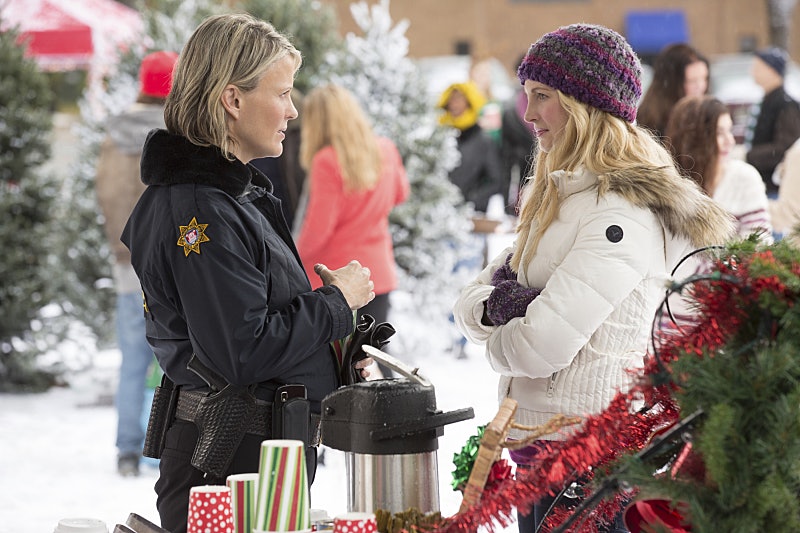 Ugh, this was a low blow Vampire Diaries, even for a show that continuously deprives us of our favorite 'ships. Because there's nothing like a little holiday cheer to go with some soul-crushing medical news, right? On Thursday, The Vampire Diaries ' "Christmas Through Your Eyes" revealed that Sheriff Forbes is dying (which Bustle writer Kelly Schremph predicted earlier that day) — but not in the way you expect. After collapsing during an adorable mother-daughter moment, decorating a Christmas tree in Caroline's dorm because she couldn't come to the Mystic Falls tree-lighting ceremony, Sheriff Forbes collapsed because she has brain cancer. Because, even though she's survived raging psychopaths and vampires, Sheriff Forbes is still a human.

This news hurt, not as much as it would've hurt to see Sheriff Forbes die at the hands of a vampire or Kai, but it hurt just the same. Especially because she hadn't gotten the chance to tell Caroline that she's sick and there's no chance of curing her — no, not even with vampire blood. (Thank you for clarifying, Stefan.) If I wasn't already convinced that TVD is pushing Caroline to jump series and land on The Originals, sealing Sheriff Forbes' fate was the icing on the cake of that theory. Without her mother, Caroline has nothing left in Mystic Falls — not even Stefan, who decided tonight that he should probably be a good friend to Caroline. (Nice try, buddy, but it might honestly be too late.)

The Vampire Diaries just keeps hitting Caroline with wave after wave of pain, trauma, and sadness. And, frankly, I can't take it anymore. It'd absolutely have been worse for Enzo or Kai or another supernatural being to kill Sheriff Forbes, but it's almost worse now to watch Caroline watch her mother suffer. She can finally go home to Mystic Falls now that Kai absorbed the travelers' spell, but she's officially got nothing to go back to. TVD made it seem like, while Sheriff Forbes isn't dead, she'll be dying soon. And after that, what's keeping Caroline in or around Mystic Falls? Absolutely nothing.

So, does this mean Julie Plec has finally come to her senses and plans to send Caroline to New Orleans? God, I hope so. It'd be an even cheaper shot for Steroline to get together now that Caroline basically told him how to act so he could handle breaking the tough news about her mom.

More like this
These 25 International Horror Movies On Netflix Prove Fear Is A Universal Language
By Bustle Editors
Paul Mescal, Man Of Mystery
By Samantha Leach and Heather Hazzan
Mike Flanagan Teases 'The Midnight Club' In This Exclusive, Creepy Clip
By Grace Wehniainen
Caleb McLaughlin Details Racism From 'Stranger Things' Fans
By Radhika Menon
Get Even More From Bustle — Sign Up For The Newsletter