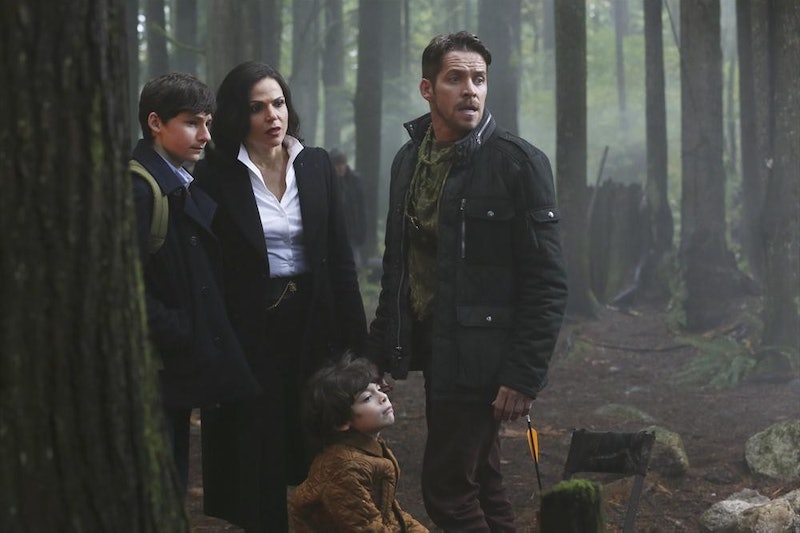 Adam Horowitz and Edward Kitsis have been teasing a death on Once Upon A Time Season 4 for some time now, and I think it'll happen in the last episode before the winter hiatus, "Heroes and Villains." Considering I'm still not over the death of Neal last season, hopefully this time the Storybrooke casualty won't leave me crying for a solid hour after the episode has wrapped. While I might not be shedding any tears, someone else in town probably will. There's a high chance that Robin Hood will die on Once Upon A Time , so that means Regina better start preparing for the worst.

The cards have been stacking against Guyliner Hook for the past few episodes, considering that Rumpelstiltskin has his heart and everything. But I don't think the show will really kill off Hook, like they have every other love interest of Emma over the last four seasons. And if it's not him, it has to be someone else who will pack an emotional one-two punch, and right now that falls on Robin's shoulders. Sure, they could go for one of the lesser featured characters, like Grumpy, but really, what kind of emotional toll would that take on the town?

Robin's in love with Regina, but still married to Marian. Marian's frozen, and he doesn't seem to be giving it too much thought. He's got a son with Marian, but yet has secret nighttime playdates with Regina (my favorite thing on OUAT is watching them dance around the word "sex").

I've thought Robin's time in Storybrooke was numbered since the first day he showed up in town. Even though Regina's slowly turning into one of the good guys, she's still not the best of the good guys — she has her evil roots ingrained in her, and that's something that's never going to leave. She might find full and complete redemption, but that doesn't mean she's going to find her fairytale happy ending. It's almost to say, if Emma is so good and she still loses everyone, why should Regina get to keep those she loves?

And in full disclosure, I completely love Regina, but as a character on the show, I don't want to see her start singing to forest animals. I never want to see Regina as a 100 percent good gal.

Which comes back to the fact that Regina can't get what she wants this time. Robin has been conflicted about his feelings this season, one second knowing he has to be loyal to Marian, but the next moment realizing that she's going to be on ice for a little bit longer than expected and rushing off to Regina. I'm not saying there's anything wrong with this, it simply makes him the perfect candidate to meet his sad Storybrooke death during the midseason finale.

According to Entertainment Weekly, the second half of OUAT 's season will focus on the villains that will be introduced Sunday night — Cruella de Vil, Ursula and the returning Maleficent — and what they're willing to do to secure their own happy ending. Can't you see Regina losing the thing she loves most (besides Henry) and returning back to her black ensembles and evil spells? I actually kind of want that to happen. Not that I want Robin to die, but I do want to see Regina turn back to her crazy evil style. In order to get there, something needs to happen that will push her over the edge.

Admit it, don't you want to see the version of OUAT where Robin's dead, and unfrozen Marian and Regina have to raise Roland together? I know I do. I'll miss you almost as much as I miss Neal, Robin.