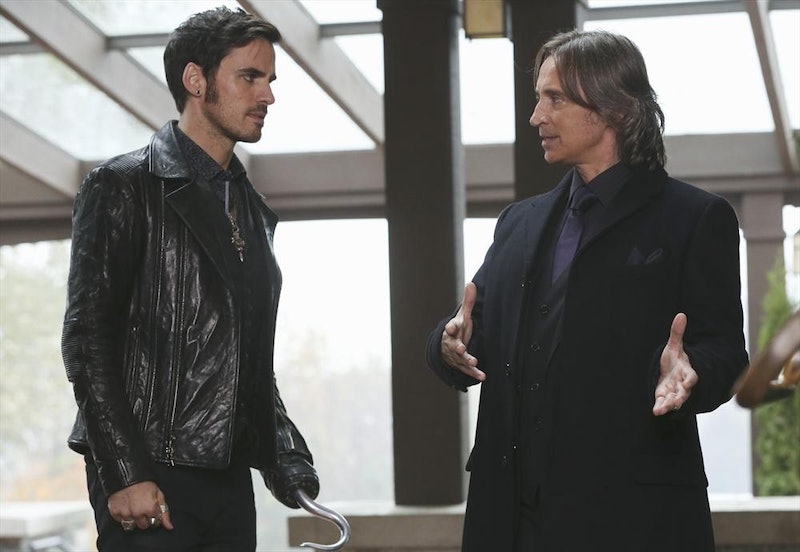 After 11 episodes of what seemed like the shortest Once Upon a Time arc so far, the enchanting ABC drama is officially wrapping up for the winter. OUAT half-seasons tend to end in major cliffhangers and usually involve a death or two, and I don't see this one being any different. Promos for the winter finale showcase the introduction of epic female villains like Cruella De Vil, Maleficent and Ursula into the mix, which is bound to create an extraordinary amount of new difficulties for our Storybrooke regulars. But which characters could die in "Heroes and Villains," and never get to see the rest of Season 4's drama unfold?

Triple the villains likely means triple the torture of trying to guess the connections between heroes and villains (and between villains and other villains). But more importantly, it also means triple the number of characters being threatened or killed off. We've seen it happen time and time again where a beloved character doesn't make it past hiatus on OUAT. As if it wasn't enough to kill off Sheriff Graham just in time for Emma to break the curse, we've also lost Neal twice and Rumple twice and countless other characters who unfortunately didn't stand a chance of coming back. So which of these remaining protagonists is most likely to get killed off next?

Captain Hook — The Most Likely

Hook foreshadowed his own death when he told Emma how great he is at surviving. Rumple has his heart with intends on destroying it and Emma's love interests tend not to last long, so Hook's chances aren't looking so great.

Rumpelstiltskin — A 50/50 Shot, But Not Likely To Stick

Well, it wouldn't be the first time Rumple died during a finale. Or even the second time for that matter. If someone is going to die, there's pretty much a 50 percent chance it will be Rumple. But if that's the case, it's possible he'll be back. Again.

Robin Hood — Not as Likely, But Could Happen Extremely Soon

Robin's relationship with Regina hasn't been as prominent in recent episodes and his wife has barely been mentioned, so I doubt OUAT will use the finale as Robin's final moments. But new villains are coming with a vengeance, and if that vengeance is aimed at Regina, Robin Hood will not be safe for very long.

Belle — Don't Count on It

Belle has been in danger before and her relationship with Rumple could have consequences in the near future, but I say she lives long enough to see Rumple take on the new villains.

Will is walking on thin ice as it is. He just barely got accepted back into Robin Hood's clan of Merry Men and he is threatening Hook at every turn. Will's presence on the show was really nothing more than a guest appearance after his role in OUAT in Wonderland, so it wouldn't be all that surprising if he didn't make it back.

The Charmings — As Safe as Safe Gets

Regina Mills — I Would Stop Watching

There's no way in hell Regina would be written off unless OUAT creators have a death wish. Regina is the very definition of a badass female protagonist and one of the best found on TV. They wouldn't dare kill her unless they were sure there won't be another season.

Unless the promos are lying, Anna, Elsa and Kristoff head back to Arendelle in the winter finale. I would really love it if they'd explain how in the world all of a sudden there is a portal that can cross realms, but whatever. Point is, they have a mission elsewhere. Disappear? Yes. Die? No.