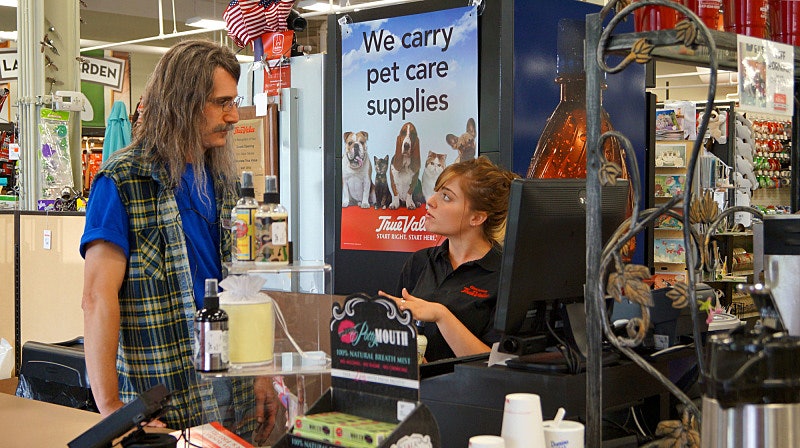 Unlike, say, The Biggest Loser or Shark Tank, the title of Undercover Boss makes it pretty clear what's going to be going down on this TV show: there's a boss... who goes undercover. Of course, there's a little more to it than that: the titular bosses are usually heads of very large corporations like Subway, or as in this week's season premiere, True Value. The show was created by Stephen Lambert first in the UK, also the creator of Wife Swap, another self-explanatory title. Of course, the real question here is: Is Undercover Boss fake? Do these employees really not know their boss is testing them?

The idea for the show grew from hearing the CEO of British Airways say that he could never truly scope out the operations of a British Airways flight or new terminal opening because he would be recognized, but how many companies have that problem?

There are two things that make Undercover Boss great. First, the terrible disguises that the bosses use to go undercover, as if a random White Castle employee knows what the Chief Business Development Officer looks like; or as if a random White Castle employee can't tell what it looks like when a person is wearing a long, scraggly wig. The second best thing is the end of the episode when the boss realizes how many wonderful employees they have, and how much trouble they had out on the front lines of their business, and decide to give reward and promotions to the employees who helped them during their undercover stint. There are smiles of disbelief, there are tears, and there are hopefully lives changed, and not just the glorification of a boss rewarding the hard work of a few.

The goal of Undercover Boss is for heads of corporations to scout out how their companies are actually performing out in the field. They find two things: great success and great failure, and both of those results usually come at the hands of specific individuals who are either rewarded or penalized.

The boss goes around to branches all over the countries and acts like a new employee being trained for a job at the company he or she actually owns. The result is inevitably that the jobs are much harder and tiring than they think they will be. Occasionally they'll come across a branch that isn't portraying the image or values they want for their company, but more often, they meet great employees who they get to know personally, and then bring into corporate headquarters to reward with personalized incentives that usually add up to about $200,000. The struggling parent gets college funds for their kids, the ambitious college student gets a promotion and their tuition paid off, the longtime employee gets a vacation. It's all heartwarming stuff, if not a little icky when you think about the short-term effectiveness of it all...

It's hard to imagine that cameras could follow the employees of a store around for a few days without them being a little suspicious of the new guy in the wig. Reddit users, of course, have entire threads trying to debunk the show, but I can't say I disagree with them. How honest of a look at corporations could this show really be? Would a bad employee really act like a bad employee with cameras around? It seems the answer to that lies in the show though, because plenty of people act plenty terrible on Undercover Bosses, and they're usually the employees with a little power (but not the main the bosses... they're all saints). The assumption is that they've been told the cameras are there for a different reason and past participants in the show swear it isn't scripted.

Undercover Boss is great in theory, but a little sketchy in execution. In addition to employees maybe adjusting the way they act, whether it be better or worse, with cameras around, the bosses are also kind of sticking their noses into something they don't fully understand for a day or two and then making changes that will effect that branch for much longer. One Reddit user alleged that Undercover Boss came to a store he had just previously quit, and his former co-workers told him that when the CEO promoted a lower level employee to store manager as a reward, it caused a hug disruption back at the branch because another higher level employee was on track for that very promotion.

Three bosses who took part in previous seasons of the show told AOL Jobs that while positive changes came from experience, the main thing that doesn't change: the pay. Even though they saw how tough the work was and how skilled some of their workers were, as Dan DiZio, CEO of the Philly Pretzel Company said, "I would love to pay more for the work, but there is a point where the market confines us --- I can't start selling pretzels for $5 apiece. It's a tough place to be. So, yes, it is a little unfair when you see one person makes so much, but that's part of life." Bosses can go undercover, but I guess the boss is still the boss.

Undercover Boss isn't the most watched reality show out there, but it's two Primetime Emmy's show from 2012 and 2013 show that it is an undercover favorite.

More like this
'Survivor' Host Jeff Probst's Salary Per Season After 22 Years Is The Real Winner
By Hugh McIntyre
What Happened With Justin & Salley Pre-'BiP'? They Fueled Rumors At Stagecoach
By Grace Wehniainen
Here's Exactly When Rachel & Tino's Fight Happened After 'The Bachelorette'
By Grace Wehniainen
So... When Are Gabby & Erich Getting Married?
By Kadin Burnett
Get Even More From Bustle — Sign Up For The Newsletter