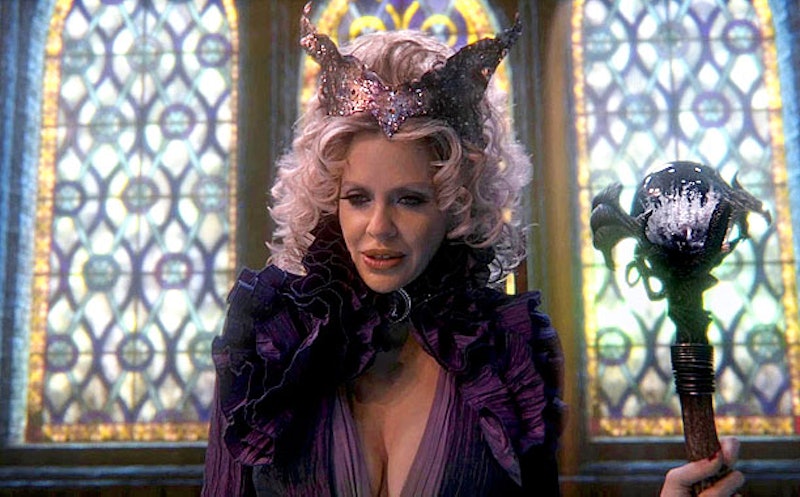 Once Upon a Time may be gearing up to put its Frozen story arc on ice (pun intended), but as we saw in Sunday night's episode promo for "Heroes and Villains," Maleficent, Cruella De Vil, and Ursula are about to infiltrate Storybrooke. And the No. 1 question on every viewer's lips can all be boiled down to one word: why? What is it that these three OUAT lady villains want that will serve as a driving force for the second half of this fairytale drama's fourth season? Well, as it turns out, they want exactly what Regina wants… a happy ending.

During an exclusive interview with Entertainment Weekly, executive producers Adam Horowitz and Edward Kitsis opened up about these new OUAT foes and assured fans that they will tie into Henry's magical story book arc. "We saw in the first half of the season that Regina (Lana Parrilla) was really questioning whether or not villains could get happy endings," Kitsis explained. "So we knew we wanted the second half to be villains in search of their happy endings." I guess you could say then, that these ladies are looking to right (or more like re-write) a few wrongs and get the fairytale ending they believe they've long been entitled to.

However, happy endings are in the eye of the beholder. After all, one person's happily ever after could be another's worst nightmare — a concept these OUAT writers are looking to explore. "It’s what makes you happy," Kitsis clarified. "For instance, if watching two beloved heroes die makes you happy, well then your happy ending is probably different than the two heroes who want to see the villain die." So I guess it's safe to assume we can rule out any hope of redemption then?

Nevertheless, this topic certainly brings up an interesting point. Most of the time we tend to assume happy endings only happen to good people who deserve them. But what if evil people could intervene and force their own twisted happy ending on others they seek to harm? The results could be catastrophic. Which makes me wonder… what would these particular characters want to see come to pass? We know Regina wants a fair shot at love now that she's a better person. But what do these not-so-redeemable Queens of Darkness want as their happily ever after? I just so happen to have a few suggestions.

Given that Kitsis basically compares her to an evil Zelda Fitzgerald, I'd say Cruella will be extremely materialistic and willing to do whatever it takes to maintain her lavish lifestyle. Perhaps when word spread of her attempted abuse toward adorable puppies, she found herself on the outs of high society (and rightfully so). She may seek to reclaim her popularity and fortune by any means necessary. Think Devil Wears Prada meets Enchanted Forest.

Since Kitsis assured that there will definitely be some Aurora sightings, I'm betting she and Maleficent will eventually wind up crossing paths. And now that this not-so Sleeping Beauty has a newborn son, Maleficent could seek to claim the child for herself. Perhaps she regrets never having children of her own and thinks she deserves a chance at motherhood too.

Not much is known about this Sea Witch's backstory, but I'm thinking she may be on the prowl for power. I mean, her main goal in The Little Mermaid, after all, was to control the entire ocean, which significantly backfired. She may still seek to claim the seven seas as her own, believing she's the one truly worthy of the job, and vow to not let anything get in the way this time… even if it means killing the Sea King himself. Or, you know, she simply wants to audition for American Idol and feels that she needs Ariel's voice to do it. Either way.

But regardless of whether my suggestions come to pass or not, one thing's for sure — these strong and powerful women are going to be an entertaining force to be reckoned with. And I, for one, can't wait.