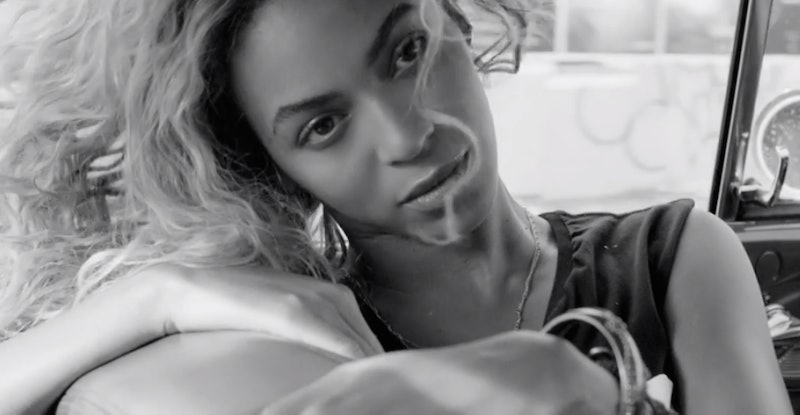 Beyoncé is my queen. I'm given a new reason to say that at least once a day — and, okay, I often slip it into conversations that have absolutely nothing to do with Beyoncé — but it's not my fault that every day I mean it. She is, after all, the only person who can release a surprise album that breaks iTunes with the number of people trying to download it at once. The world constantly waits with baited breath to see what Beyoncé is going to do next, and I am no different. I thought Nicki Minaj and Beyoncé's "Feeling Myself" leak was all the good Bey news I'd be getting this week, but I really should have thought again. On her YouTube channel, Beyoncé posted a reflective video called "Yours and Mine," in which she looked over her life, past, present, and future with a critical eye and managed to inspire us all.

"I sometimes wish I could just be anonymous, walk down a street just like everyone else," Beyoncé begins in the video as she reflects on the price of fame and the commonplace things we take for granted in our live as the mere plebeians looking up to the ethereal goddess that is Beyoncé. "Before I was famous I was the girl on the hill with the guitar. I was the girl that just wanted a beautiful view of the beach. And now that I'm famous, it's really, really difficult to do very simple things. I think it's the hardest thing to give up."

However, that's the beginning and end of the singer's complaints about her life. She goes on to discuss how her mother taught her to never be a victim and how thankful she is for all of the blessings in her life, even with the pain of being objectified and commodified by a public that barely even sees her as human. Naturally, because this wouldn't be a Beyoncé video without some reference to it, she also reiterates her feminist beliefs so there's no confusion about it.

I always considered myself a feminist, although I was always afraid of that word because people put so much on it when honestly it’s very simple. It’s just a person that believes in equality for men and women. Men and women balance each other out, and we have to get to a point where we are comfortable with appreciating each other.

In addition, Beyoncé also gives us a sneak peek into her feelings about her husband Jay Z and her daughter Blue — as well as a touching reference to her time with Destiny's Child and how she felt, and continues to feel, about Kelly Rowland and Michelle Williams — painting a picture of a woman who is more real than her goddess status would have implied. At the end of the day, whether you're a fan of Beyoncé, a member of the Beyhive, or someone who is on the fence about the woman that everyone can't stop talking about, this 11 minute video will absolutely tug at your heart strings and remind you why she's an artist to be respected. You don't have to love her music or love her all the time to appreciate her contributions to the musical zeitgeist.

Check out the video below.

More like this
Beyoncé’s Special Tribute To Sister Solange Was Both Touching & Hilarious
By Stephanie Topacio Long
Everything To Know About Taylor Swift’s 10th Studio Album, 'Midnights'
By Grace Wehniainen and Jake Viswanath
How Ghosts Inspired Kesha’s New Music
By Jake Viswanath
Girls Aloud Announce Primark Collab In Honour Of Sarah Harding
By Sophie McEvoy
Get Even More From Bustle — Sign Up For The Newsletter