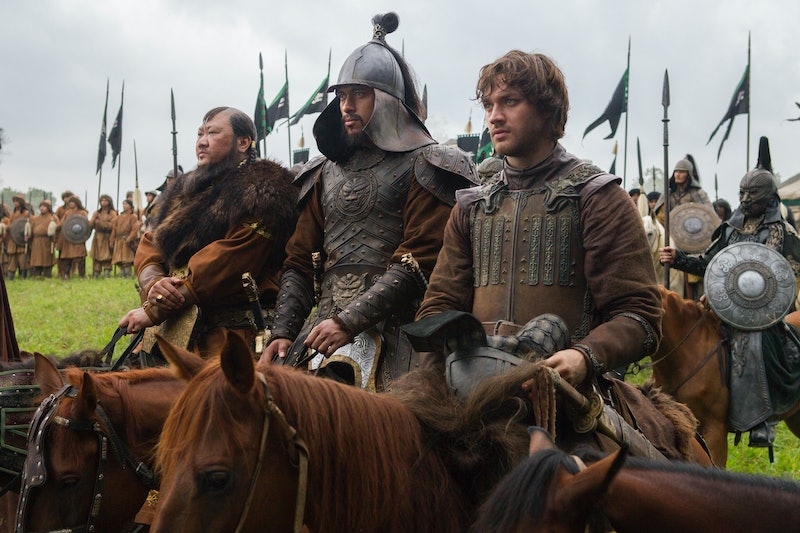 I woke up this morning excited to sample Netflix's Marco Polo; as a diehard bingewatcher of House of Cards and Orange is the New Black, I was hopeful that the online streaming service's newest original program would live up to the high bar set by those award-worthy series. And it's clear that Netflix executives were hopeful as well — they poured $90 million into their epic drama, based on the journeys of the 13th century explorer throughout Central Asia. Filmed in Italy, Kazakhstan, and Malaysia, Marco Polo is often cinematic in scope... But does it live up to its potential?

It's clear that Netflix execs used the same algorithmic approach when crafting this show as they did when creating House of Cards. Two years ago, their algorithms told them that viewers liked David Fincher, Kevin Spacey, and political thrillers. Now, they're showing that viewers like sweeping period pieces with lots of blood and boobs — and Marco Polo delivers both of those in spades. (Especially the latter.) But while it successfully emulates Game of Thrones in all the superficial ways, it doesn't seem to understand what viewers really love about that show: namely, the complex characters and the unpredictable plot. Watching Netflix's newest show, it feels like the writers were so busy trying to hit all the algorithm-mandated beats, they forgot to craft anything compelling under the surface.

What follows is an approximation of my reactions while bingeing the first three episodes of Marco Polo:

Oh no wait, that mopey face doesn't belong to Kit Harington, but rather 24-year-old Italian actor Lorenzo Richelmy. Much like Harington (who, before he starred in an American show, first gained acclaim in his native England for playing the lead in the original production of War Horse), Richelmy is making his American debut after crafting a successful career on stage and film in his native Italy.

That title sequence is beautiful.

House of Cards and Orange is the New Black are both great shows, but neither of them have fantastic opening credits. Marco Polo one-ups them both with a beautiful sequence where ink blots on parchment transform into meticulously-drawn pictures of falcons, horses, and armies.

This show is ready-made for a drinking game.

There's only one rule: Anytime anyone says the name "Marco," you shout "Polo!" and take a shot. (You might need the help if you plan on watching all 10 episodes in one sitting.)

First we had a Jon Snow wannabe, now we have all these horselords riding around everywhere, one of whom goes by the name "Khan" — not to be confused with "Khal." However, there's a good reason for the similarity between Marco Polo's Mongolians and GoT's Dothraki: George R.R. Martin has stated that he based his horselords at least partly on the Mongolian culture.

Marco Polo is... sort of boring, you guys.

For a dude who's in just about every scene, Marco is surprisingly bland. I'm willing to give Richelmy the benefit of the doubt and assume that a lot of that has to do with the language barrier (he literally learned English specifically for this role) since he's a successful actor in Italy. But regardless of the reason, Marco is by far the least interesting person onscreen, and probably the least captivating title character since Jack... and Jill.

But man, this show is gorgeous.

I sort of want to just mute the sound and go about my day, but leave the show on as a peaceful screensaver. Wait, did that guy just get his head half-chopped-off? Okay, not so peaceful.

Is that the dude from Prometheus?

Why yes, yes it is. Although you may not recognize him right away, that's British actor Benedict Wong, who appeared as Ravel in Ridley Scott's alien sorta-prequel, as well as other cult sci-fi hits like Sunshine and Moon. The reason he looks so different is because he reportedly packed on 30 pounds to play the real-life Mongolian emperor Kublai Khan.

The Dark Knight's Lau is up to his old tricks.

The mob accountant who absconded to Hong Kong with Maroni's money, only to be extradited by Batman and then burned alive atop a giant pile of cash by the Joker, appears in Marco Polo as the conniving Jia Sidao, a rival plotting to overthrow Kublai Khan. He's played by Singaporean actor Chin Han, who you may also have seen in Contagion, Arrow, The Blacklist, or Captain America: The Winter Soldier.

Yeesh, this show has a woman problem.

Remember when Game of Thrones singlehandedly coined the term "sexposition" by having scenes of lengthy dialogue overlaid with gratuitous nudity, only to receive a backlash so intense they actually scaled back on it in later seasons? Well, Marco Polo is doing its darndest to bring that dubious practice back to life. And that's not the only reason the show has a woman problem. Pretty much every female character introduced in the first three episodes is either a concubine or an aged courtier or literally a captive princess. At the end of the first episode, a roomful of naked women are presented to our protagonist as prizes to be won if he proves his loyalty to the emperor. Even the one "strong woman" we meet (and we know she's strong because her singular trait seems to be that she knows how to wrestle) is just a challenge for Marco to conquer. And conquer he does — they have sex within thirty seconds of meeting each other.

Is this supposed to be a comedy?

Maybe that would explain the blind kung fu master named Hundred Eyes who trains against a cobra. Or the spouting of such groan-worthy aphorisms as, "It is better to be hated for what you are than be loved for what you are not." Or all the stereotypical talk of "yin and yang" and "crickets and mantises." Or the ultimate gamer fantasy sequence of a woman slo-mo fighting soldiers with a sword while completely in the nude. Am I supposed to be laughing?

I'd almost rather be watching Hemlock Grove right now.

Wait a second... Why are they all speaking English?