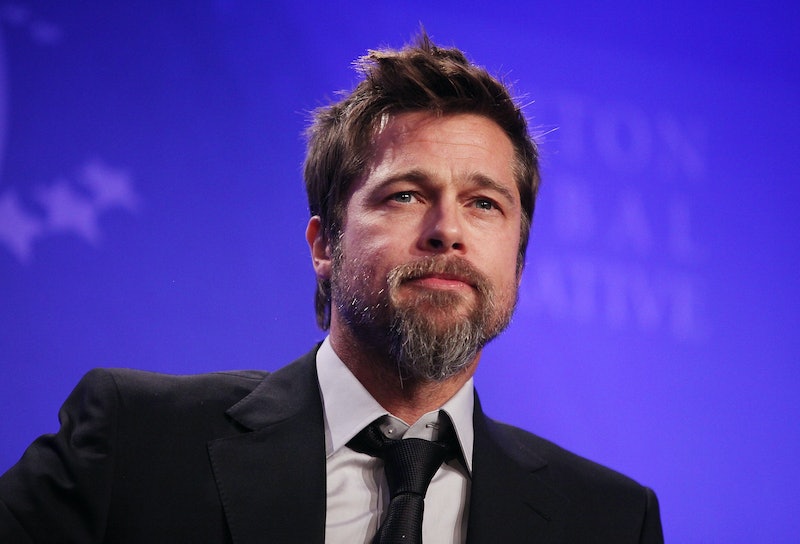 Rihanna is the undisputed master of throwing shade. And now she's learned how it feels to be the butt of a joke because Brad Pitt made some jokes at Rihanna's expense. But don't worry, Mr. Pitt was not really throwing shade at RiRi, he was introducing her at her Diamond Ball charity gala on Thursday night in Beverly Hills. I jut have one pressing question: Why was Brad Pitt even there? Do they even know each other? Rihanna explained his presence saying, "Brad Pitt loves charity, he loves giving back and it was just as simple as that. He was honored to be a part of it, so I'm really happy he's here."

So what exactly happened last night? With an image of a young Rihanna displayed on a screen behind him, Pitt said, "I've often asked the very questions you yourself are asking right now — what the f--k went wrong? I give you exhibit A. Look at the young girl before you, all full of hopes and dreams, living a humble existence in Barbados, her whole life ahead of her." He then jokes that she started to roll with a bad crowd when she signed with Jay Z: "For those of you not in the know, The Jay Z was an evil impresario known for turning out hit records and ripping insane lyrics and fresh beats. Needless to say it was all downhill from there."

One does not throw shade at Rihanna unless you have her consent, so this means that Ri must think pretty highly of Pitt to let him get away with it. As I see it, this is a perfect start to a best friendship, especially when there are so many other reasons for this to happen. Yes, I know it sounds random. Trust me though, Brihanna is a good idea.

Before you judge Rihanna's not-so-family-friendly persona, check out her Twitter pics. Rihanna is always posting pics babysitting and hanging out with her niece, Majesty. She can definitely help Brad and Angelina Jolie keep the children entertained.

They Will Both Forever Be Associated with Their Exes

Rihanna is asked about Chris Brown in almost every interview, and Brad Pitt will never escape his divorce from Jennifer Aniston. They have both moved on from these former relationships, but thanks to the media they will never feel a true separation from their former loved ones. This has got to be so annoying. I feel like my personal space is invaded when an ex-boyfriend appears in my Facebook newsfeed, so it would drive me crazy if people asked me about him all the time. I could not imagine this happening to me, but these two both understand the struggle.

Rihanna certainly knows how to command an audience. Brad Pitt joked that Rihanna has "only 90 million Facebook fans and 40 million Twitter followers." She is the queen of social media. Brad needs to sign up for Instagram and start posting some cute family photos with clever hashtags in the caption.

They Both Love Soccer

I was able to keep up with the action of this year's World Cup through Rihanna's hilarious live tweets during every soccer match. She even partied with the German team after they took home the trophy. Pitt joined the U.S. World Cup Bid Committee in 2010 with the hope to bring a future world cup to America. I can definitely picture these two hanging out in the stands to watch the games together.

They Can Get Tattoos Together

As of my last count, Rihanna has 22 tattoos, and Pitt has some ink on his biceps and abs. Best friend tattoos would make their friendship very legit and I would die from happiness.

They Both Support Gay Rights

Pitt has been very vocal about his support for gay rights and gay marriage. He told MTV News, "Listen, if it doesn't sit well in your religion, let your God sort it out in the end. But that's us, we're equal." Rihanna has been just as impassioned about the cause. In February 2014, she posted a photo of herself wearing a hat with "P6" on it. P6 is short for Principle 6, the campaign against Russia's anti-gay propaganda at the winter Olympics.

As you can see, Pitt and Rihanna need to capitalize on all of the unique things they have in common and become the best friend pair that our world needs. Brihanna would be the ultimate duo.

More like this
Twitter Is Freaking Out Over Rihanna’s 2023 Super Bowl Halftime Show Announcement
By Stephanie Topacio Long
Gisele Bündchen Appears To Address Those Tom Brady Divorce Rumors
By Radhika Menon
Pro Footballer Zander Murray Is "Blown Away" By Support After Coming Out
By Sam Ramsden
Everything To Know About Taylor Swift’s 10th Studio Album, 'Midnights'
By Grace Wehniainen and Jake Viswanath
Get Even More From Bustle — Sign Up For The Newsletter