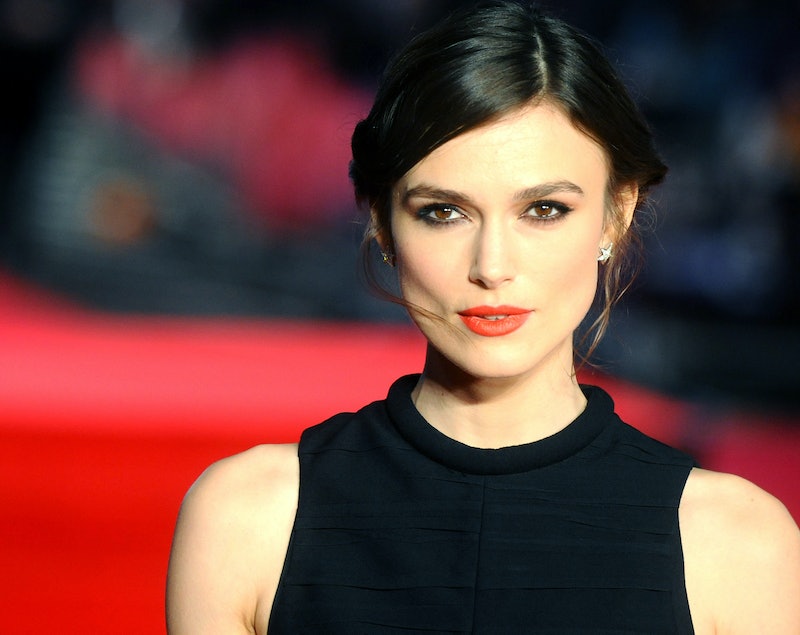 It's officially official: Keira Knightley is pregnant with her first bundle of love and joy and British accents. The 29-year-old actress' rep confirmed on Friday that Knightley is indeed pregnant. It will be her first child with her musician husband James Righton. This means there's another adorable celebrity baby who will have a more impeccably styled wardrobe by the age of one than you could ever hope for. So in the tradition of being hella nosy, we must ask: when is Keira Knightley's baby due?!

The first rumors about Knightley's possible pregnancy came when she turned down some wine earlier this week at the British Independent Film Awards. If she hadn't confirmed that she was pregnant on Friday, I'd be like damn, what if a girl just doesn't want a drink? It's an exciting time for Knightley, though, who's been nominated for a Golden Globe for Best Supporting Actress in the Alan Turing biopic The Imitation Game starring Benedict Cumberbatch, another one of our favorite Brits. Not only that, she was also nominated for a SAG Award for Best Supporting Actress for the role. It's gonna be a busy awards season for Knightley, but even if she doesn't take home any statues (I hope she does!), she has plenty to look forward to with a baby on the way. So when exactly is her little gal arriving?

First of all, GAH! This adorable dress! This past Sunday at the British Independent Film Awards, where Knightley apparently scandalously turned down some wine which got the rumor mill a-turnin', Knightley wore this super sweet tea length dress. Now talk is being talked that the voluminous skirt of this festive dreamy dress was to hide the beginnings of a baby bump. Rumor has it that at the early December event, Knightley was already three months pregnant. So that could mean the baby would arrive in May. Plausible...

Pirates of the Caribbean is shooting its fifth installment next year for five months in Australia, and Knightley has confirmed she is NOT going to be returning to the franchise' cast. Because she's so over it, or because she doesn't have five months to spare at all in 2015 because she'll be with baby?!

In August, Knightley did a powerful topless photoshoot for Interview to protest the use of photoshop on women's bodies in magazines. She looks beautiful, strong, but decidedly unpregnant. Which would make sense if she were three months pregnant at the British Independent Film Awards in early December, meaning the baby probably came to be in early September.

So it looks like springtime is the right time for baby Knightley-Righton to come into the world. We can't wait to see what cute fashion Knightley steps out in this awards season with her baby bump as her best accessory.

More like this
Everything To Remember About Lace Morris Before 'Bachelor In Paradise' Season 8
By Grace Wehniainen
Tyler Perry Makes Rare Comment About Meghan Markle & Prince Harry's Love Life
By Radhika Menon
What Does Nancy Jo Sales Think Of 'The Real Bling Ring'?
By Arya Roshanian
Paul Mescal, Man Of Mystery
By Samantha Leach and Heather Hazzan
Get Even More From Bustle — Sign Up For The Newsletter